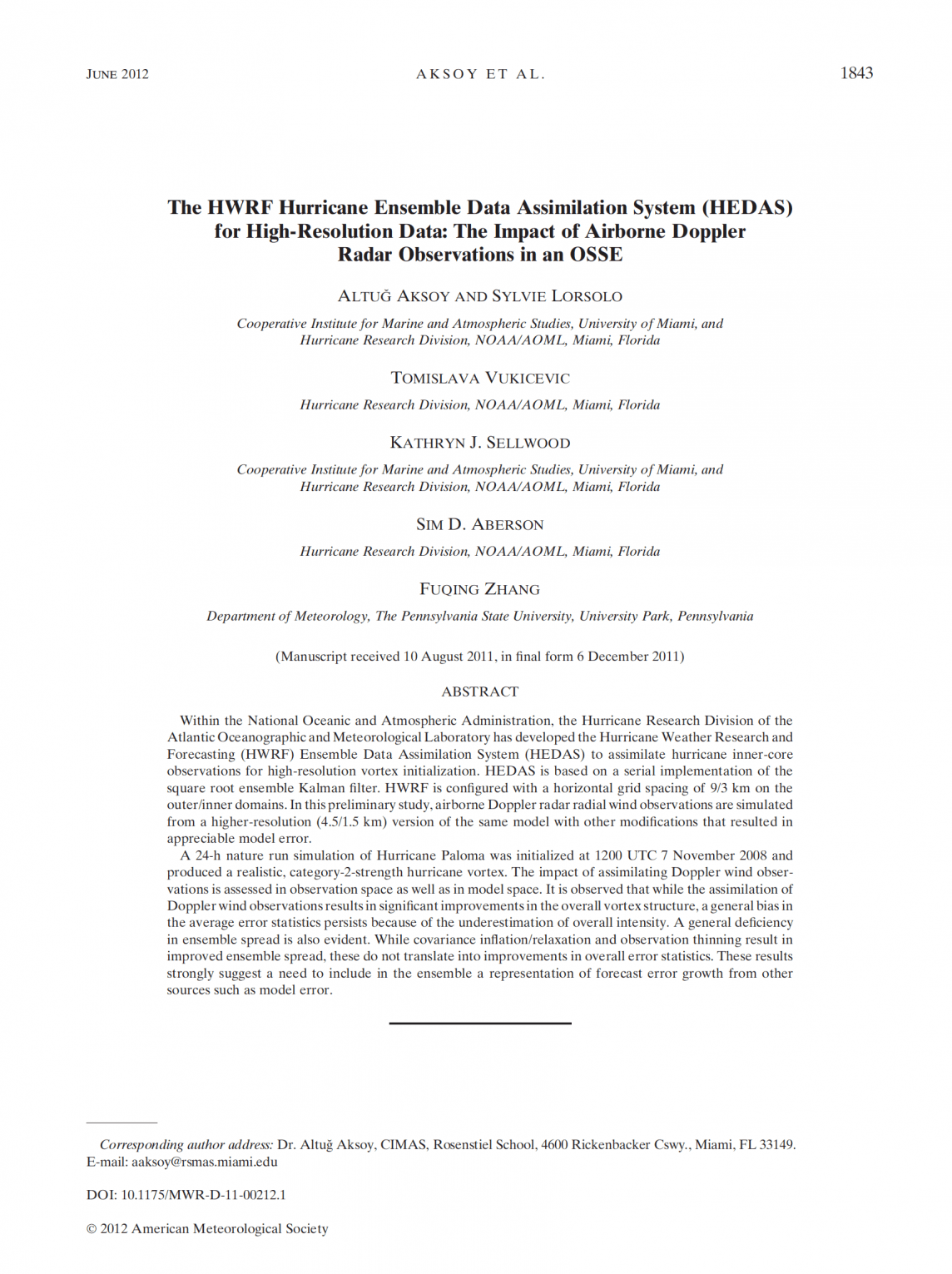 Within the National Oceanic and Atmospheric Administration, the Hurricane Research Division of the Atlantic Oceanographic and Meteorological Laboratory has developed the Hurricane Weather Research and Forecasting (HWRF) Ensemble Data Assimilation System (HEDAS) to assimilate hurricane inner-core observations for high-resolution vortex initialization. HEDAS is based on a serial implementation of the square root ensemble Kalman filter. HWRF is configured with a horizontal grid spacing of 9/3 km on the outer/inner domains. In this preliminary study, airborne Doppler radar radial wind observations are simulated from a higher-resolution (4.5/1.5 km) version of the same model with other modifications that resulted in appreciable model error. A 24-h nature run simulation of Hurricane Paloma was initialized at 1200 UTC 7 November 2008 and produced a realistic, category-2-strength hurricane vortex. The impact of assimilating Doppler wind observations is assessed in observation space as well as in model space. It is observed that while the assimilation of Doppler wind observations results in significant improvements in the overall vortex structure, a general bias in the average error statistics persists because of the underestimation of overall intensity. A general deficiency in ensemble spread is also evident. While covariance inflation/relaxation and observation thinning result in improved ensemble spread, these do not translate into improvements in overall error statistics. These results strongly suggest a need to include in the ensemble a representation of forecast error growth from other sources such as model error. 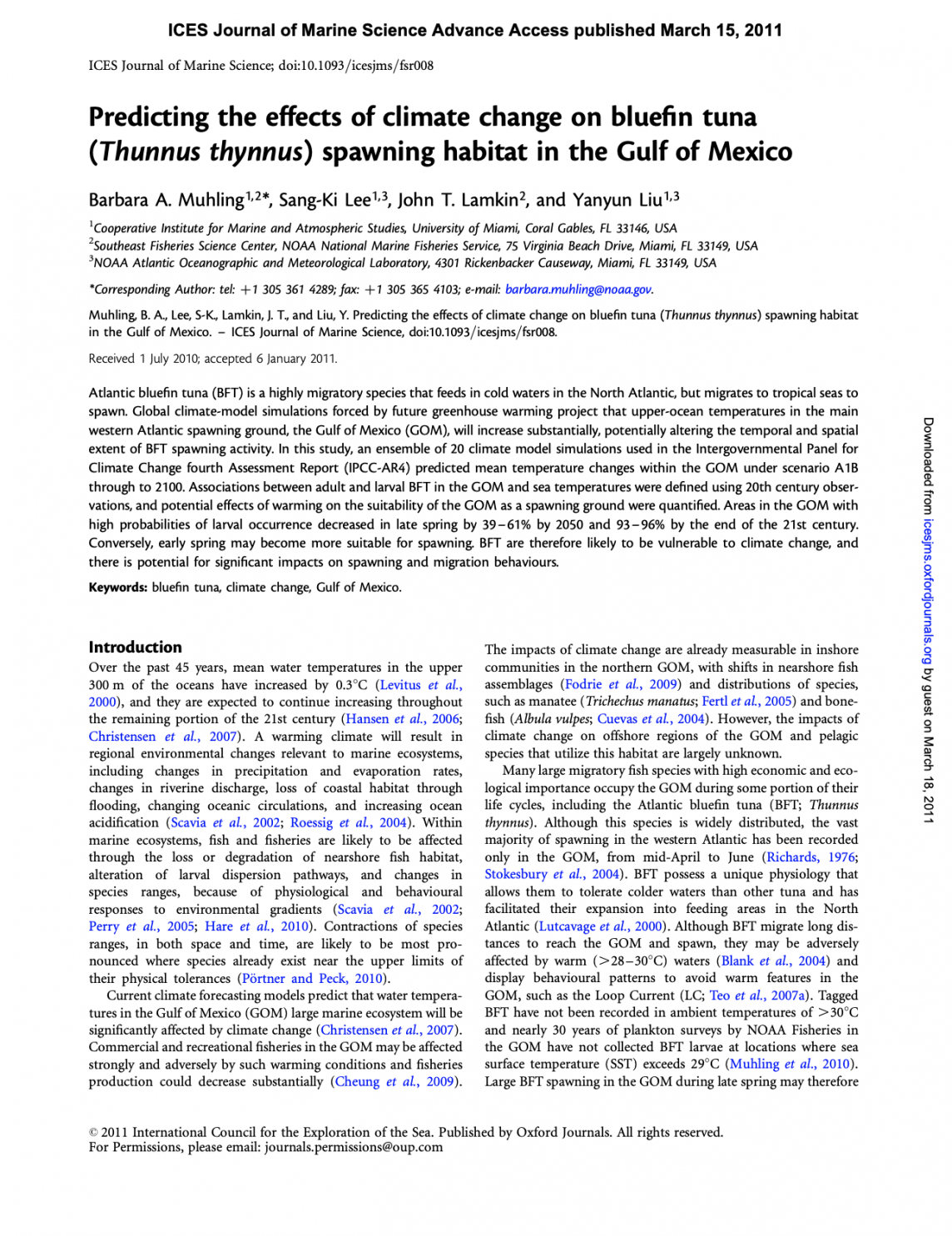 Abstract: Atlantic bluefin tuna (BFT) is a highly migratory species that feeds in cold waters in the North Atlantic, but migrates to tropical seas to spawn. Global climate-model simulations forced by future greenhouse warming project that upper-ocean temperatures in the main western Atlantic spawning ground, the Gulf of Mexico (GOM), will increase substantially, potentially altering the temporal and spatial extent of BFT spawning activity. In this study, an ensemble of 20 climate model simulations used in the Intergovernmental Panel for Climate Change fourth Assessment Report (IPCC-AR4) predicted mean temperature changes within the GOM under scenario A1B through to 2100. Associations between adult and larval BFT in the GOM and sea temperatures were defined using 20th century obser- vations, and potential effects of warming on the suitability of the GOM as a spawning ground were quantified. Areas in the GOM with high probabilities of larval occurrence decreased in late spring by 39–61% by 2050 and 93–96% by the end of the 21st century. Conversely, early spring may become more suitable for spawning. BFT are therefore likely to be vulnerable to climate change, and there is potential for significant impacts on spawning and migration behaviours. 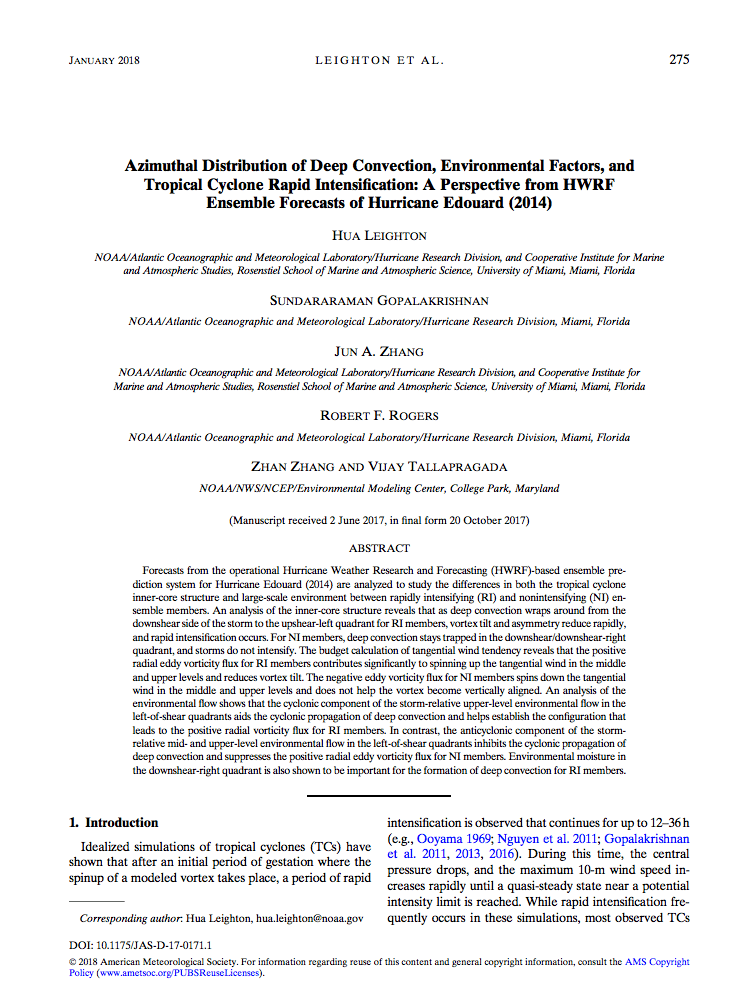 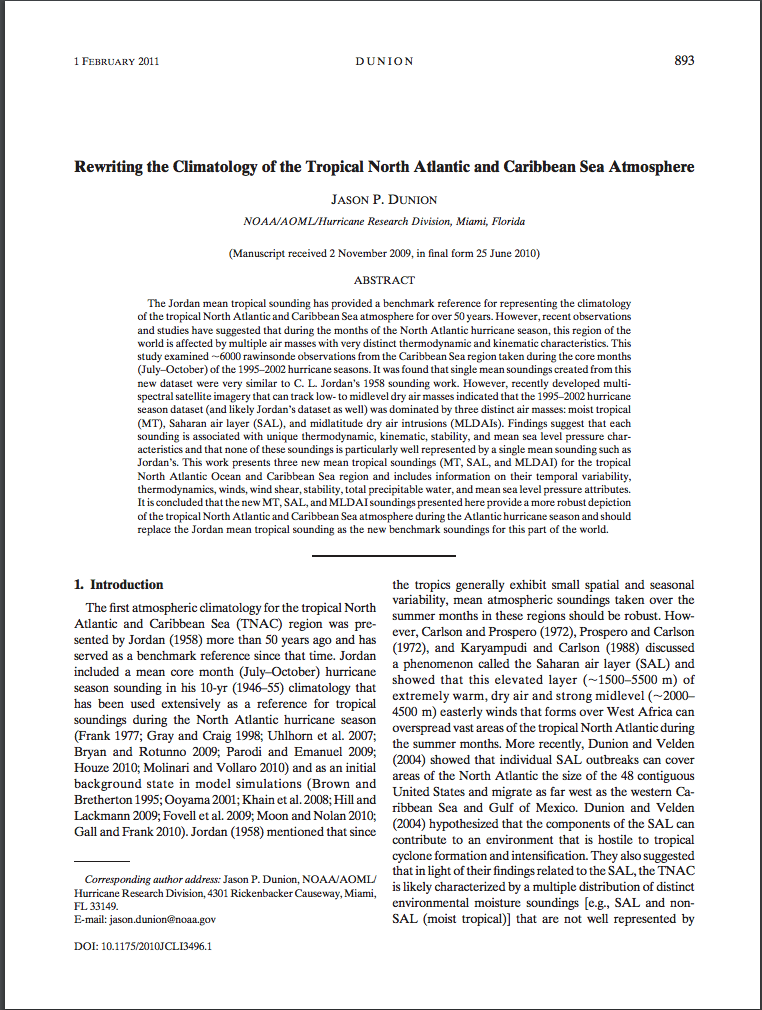 The Jordan mean tropical sounding has provided a benchmark reference for representing the climatology of the tropical North Atlantic and Caribbean Sea atmosphere for over 50 years. However, recent observations and studies have suggested that during the months of the North Atlantic hurricane season, this region of the world is affected by multiple air masses with very distinct thermodynamic and kinematic characteristics. This study examined ;6000 rawinsonde observations from the Caribbean Sea region taken during the core months (July–October) of the 1995–2002 hurricane seasons. It was found that single mean soundings created from this new dataset were very similar to C. L. Jordan’s 1958 sounding work. However, recently developed multispectral satellite imagery that can track low- to midlevel dry air masses indicated that the 1995–2002 hurricane season dataset (and likely Jordan’s dataset as well) was dominated by three distinct air masses: moist tropical (MT), Saharan air layer (SAL), and midlatitude dry air intrusions (MLDAIs). Findings suggest that each sounding is associated with unique thermodynamic, kinematic, stability, and mean sea level pressure characteristics and that none of these soundings is particularly well represented by a single mean sounding such as Jordan’s. This work presents three new mean tropical soundings (MT, SAL, and MLDAI) for the tropical North Atlantic Ocean and Caribbean Sea region and includes information on their temporal variability, thermodynamics, winds, wind shear, stability, total precipitable water, and mean sea level pressure attributes. It is concluded that the new MT, SAL, and MLDAI soundings presented here provide a more robust depiction of the tropical North Atlantic and Caribbean Sea atmosphere during the Atlantic hurricane season and should replace the Jordan mean tropical sounding as the new benchmark soundings for this part of the world. 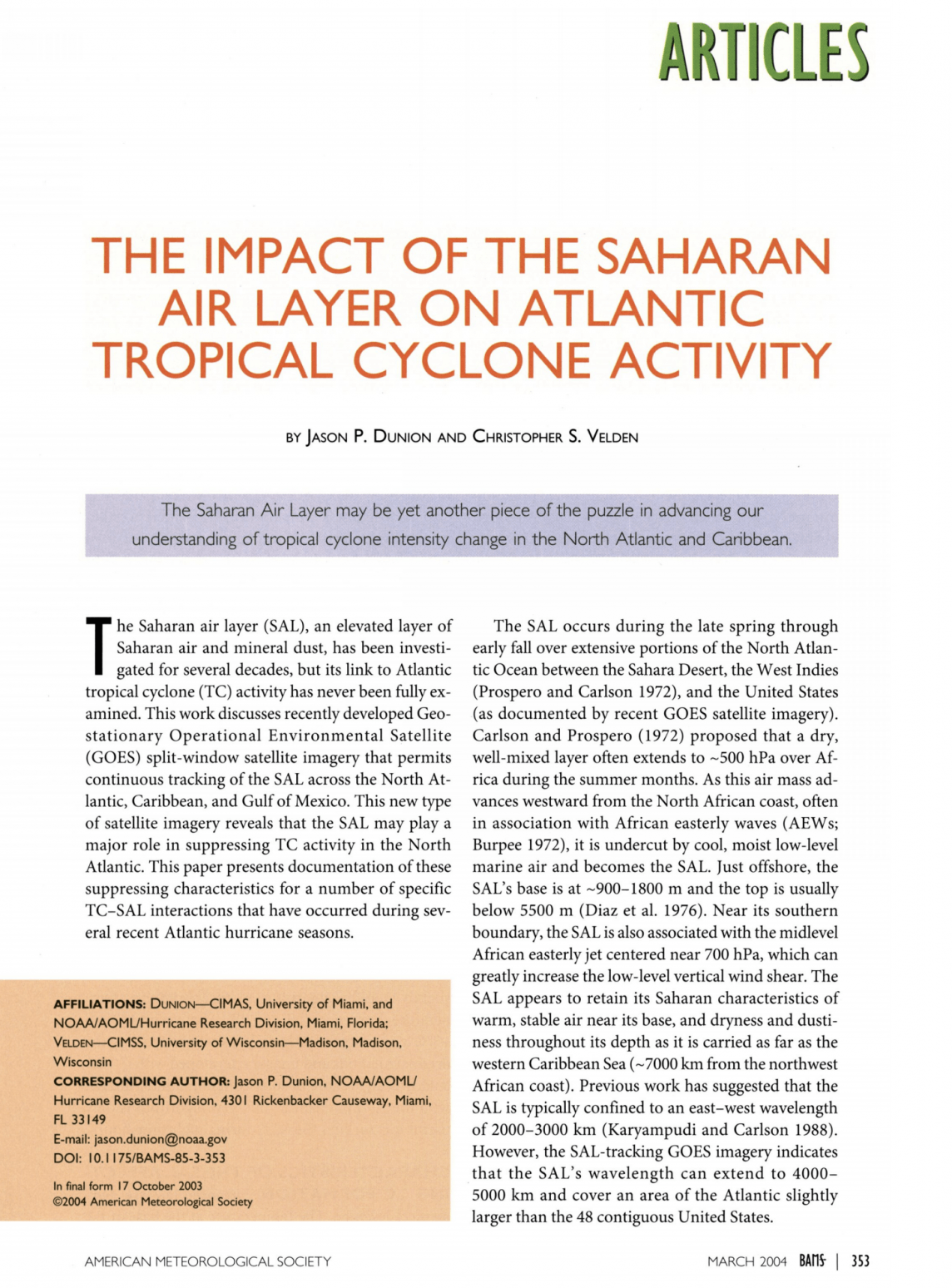 Abstract: A deep well-mixed, dry adiabatic layer forms over the Sahara Desert and Shale regions of North Africa during the late spring, summer, and early fall. As this air mass advances westward and emerges from the northwest African coast, it is undercut by cool, moist low-level air and becomes the Saharan air layer (SAL). The SAL contains very dry air and substantial mineral dust lifted from the arid desert surface over North Africa, and is often associated with a midlevel easterly jet. A temperature inversion occurs at the base of the SAL where very warm Saharan air overlies relatively cooler air above the ocean surface. Recently developed multispectral Geostationary Operational Environmental Satellite (GOES) infrared imagery detects the SAL’s entrained dust and dry air as it moves westward over the tropical Atlantic. This imagery reveals that when the SAL engulfs tropical waves, tropical disturbances, or preexisting tropical cyclones (TCs), its dry air, temperature inversion, and strong vertical wind shear (associated with the mid-level easterly jet) can inhibit their ability to strengthen. The SAL’s influence on TCs may be a factor in the TC intensity forecast problem in the Atlantic and may also contribute to this ocean basin’s relatively reduced level of TC activity. 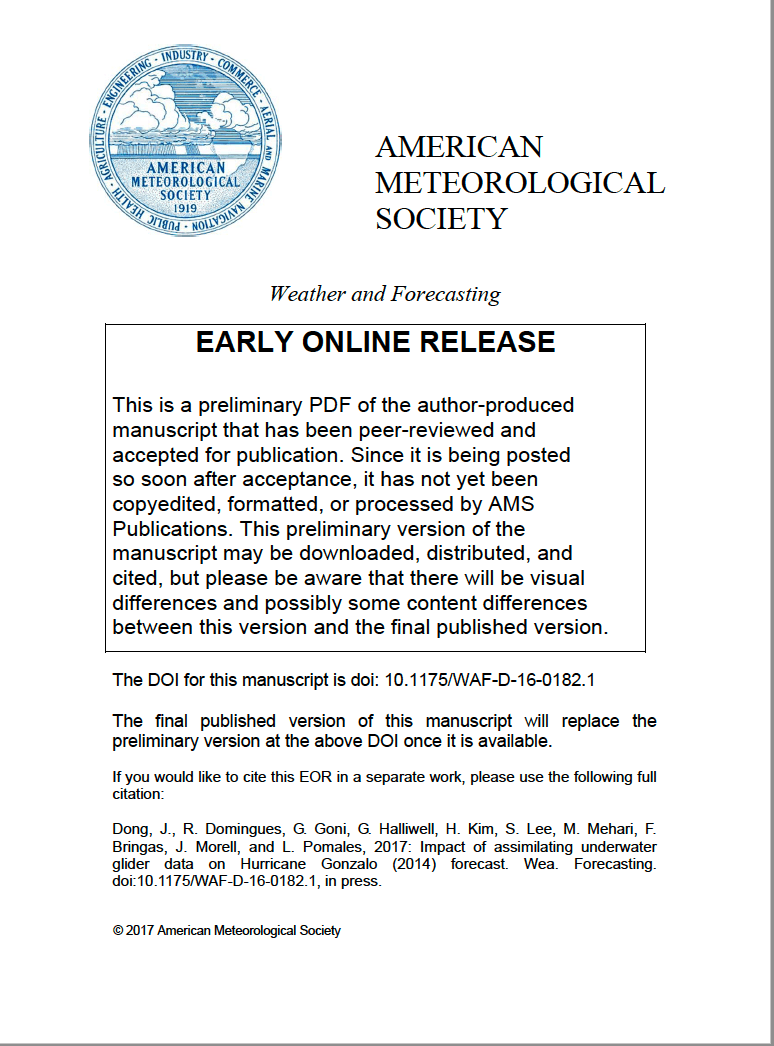 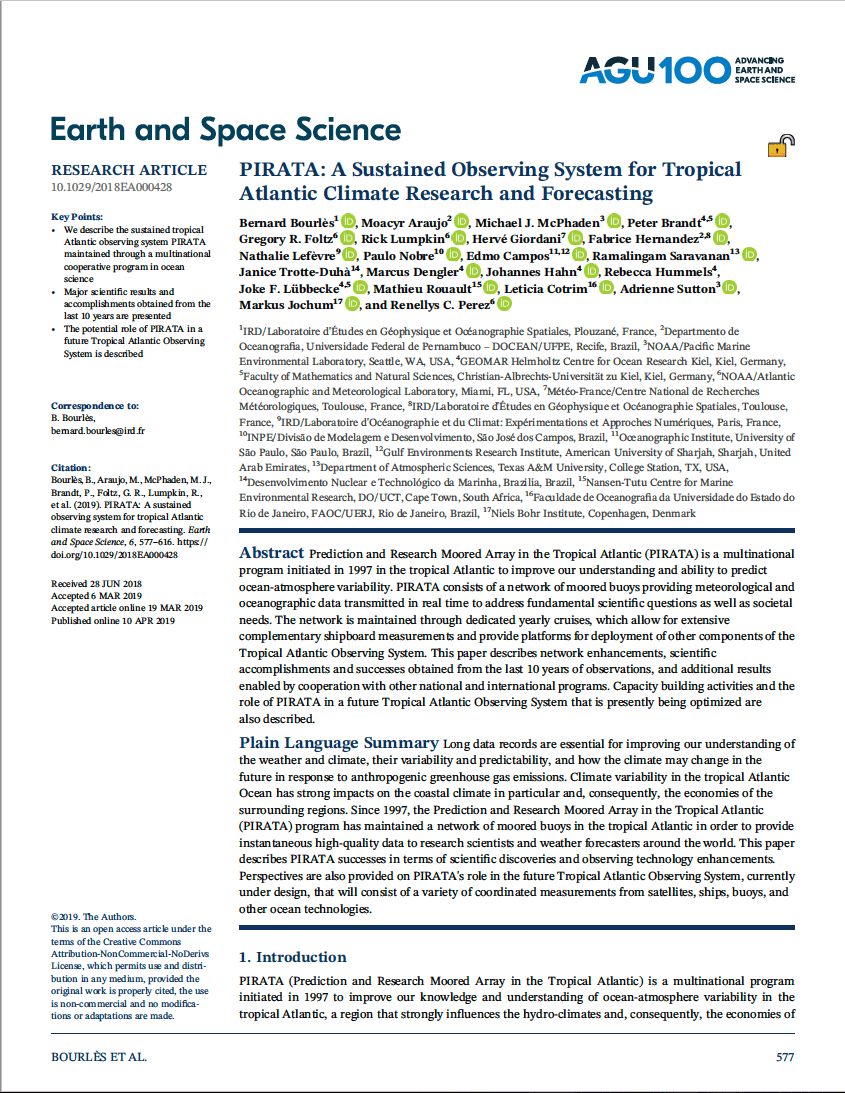 Long data records are essential for improving our understanding of the weather and climate, their variability and predictability, and how the climate may change in the future in response to anthropogenic greenhouse gas emissions. Climate variability in the tropical Atlantic Ocean has strong impacts on the coastal climate in particular and, consequently, the economies of the surrounding regions. Since 1997, the Prediction and Research Moored Array in the Tropical Atlantic (PIRATA) program has maintained a network of moored buoys in the tropical Atlantic in order to provide instantaneous high‐quality data to research scientists and weather forecasters around the world. This paper describes PIRATA successes in terms of scientific discoveries and observing technology enhancements. Perspectives are also provided on PIRATA’s role in the future Tropical Atlantic Observing System, currently under design, that will consist of a variety of coordinated measurements from satellites, ships, buoys, and other ocean technologies. 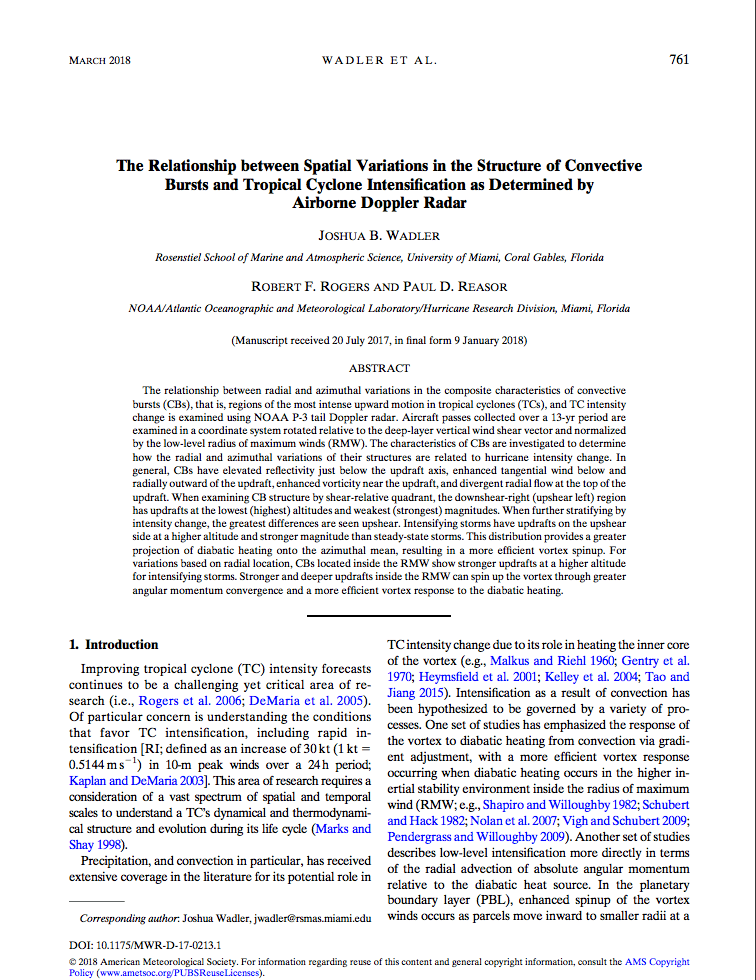 Abstract: The relationship between radial and azimuthal variations in the composite characteristics of convective bursts (CBs), that is, regions of the most intense upward motion in tropical cyclones (TCs), and TC intensity change is examined using NOAA P-3 tail Doppler radar. Aircraft passes collected over a 13-yr period are examined in a coordinate system rotated relative to the deep-layer vertical wind shear vector and normalized by the low-level radius of maximum winds (RMW). The characteristics of CBs are investigated to determine how the radial and azimuthal variations of their structures are related to hurricane intensity change. In general, CBs have elevated reflectivity just below the updraft axis, enhanced tangential wind below and radially outward of the updraft, enhanced vorticity near the updraft, and divergent radial flow at the top of the updraft. When examining CB structure by shear-relative quadrant, the downshear-right (upshear left) region has updrafts at the lowest (highest) altitudes and weakest (strongest) magnitudes. When further stratifying by intensity change, the greatest differences are seen upshear. Intensifying storms have updrafts on the upshear side at a higher altitude and stronger magnitude than steady-state storms. This distribution provides a greater projection of diabatic heating onto the azimuthal mean, resulting in a more efficient vortex spinup. For variations based on radial location, CBs located inside the RMW show stronger updrafts at a higher altitude for intensifying storms. Stronger and deeper updrafts inside the RMW can spin up the vortex through greater angular momentum convergence and a more efficient vortex response to the diabatic heating 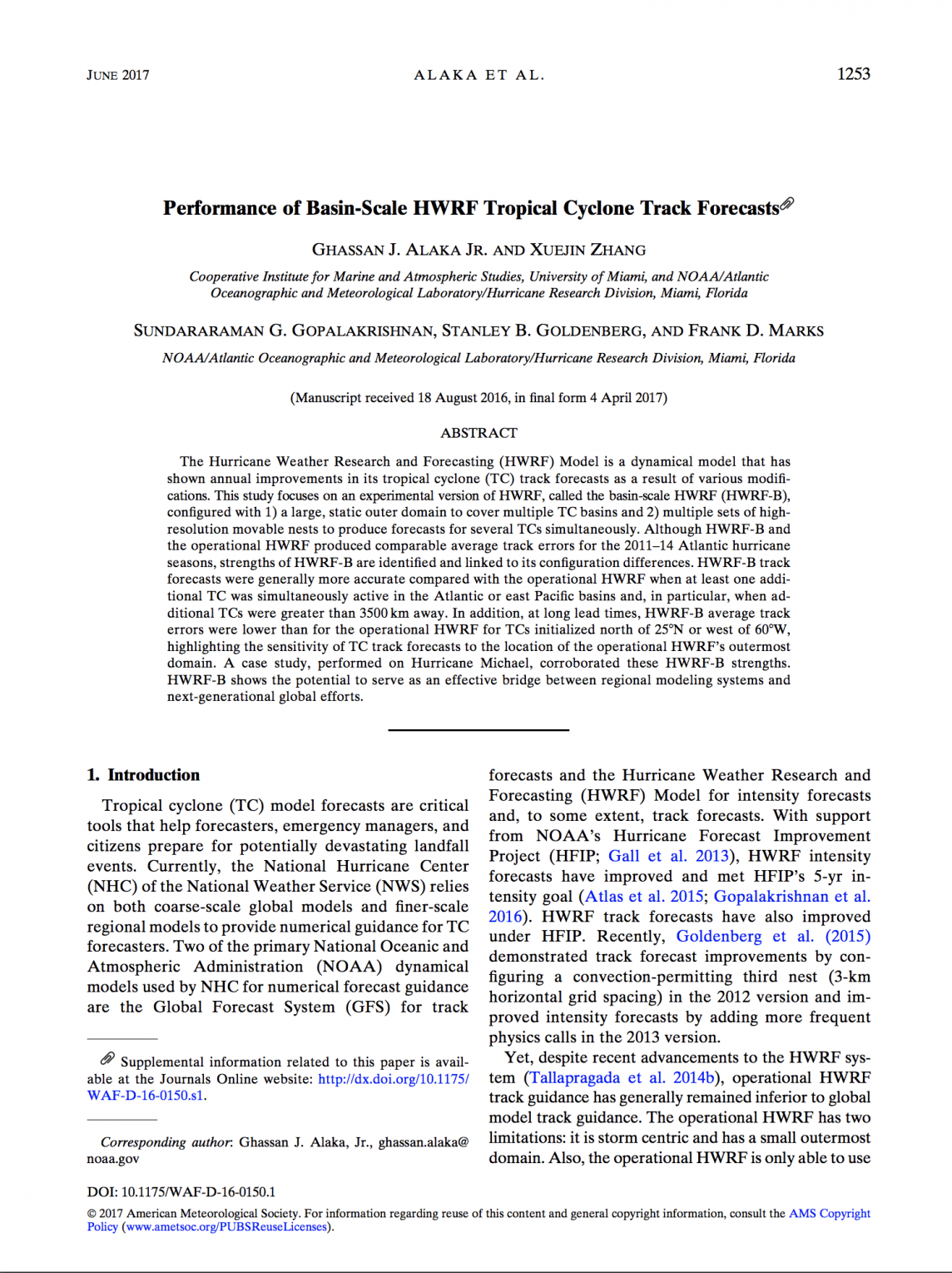 Abstract: The Hurricane Weather Research and Forecasting model (HWRF) is a dynamical model that has shown annual improvements to its tropical cyclone (TC) track forecasts as a result of various modifications. This study focuses on an experimental version of HWRF, called the “basin-scale” HWRF (HWRF-B), configured with: (1) a large, static outer domain to cover multiple TC basins; and (2) multiple sets of high-resolution movable nests to produce forecasts for several TCs simultaneously. Although HWRF-B and the operational HWRF produced comparable average track errors for the 2011-2014 Atlantic hurricane seasons, strengths of HWRF-B are identified and linked to its configuration differences. HWRF-B track forecasts were generally more accurate compared to the operational HWRF when at least one additional TC was simultaneously active in the Atlantic or East Pacific basins and, in particular, when additional TCs were greater than 3500 km away. In addition, at long lead times, HWRF-B average track errors were lower than for the operational HWRF for TCs initialized north of 25°N or west of 60°W, highlighting the sensitivity of TC track forecasts to the location of the operational HWRF outermost domain. A case study, performed on Hurricane Michael, corroborated these HWRF-B strengths. HWRF-B shows potential to serve as an effective bridge between regional modeling systems and next generational global efforts. 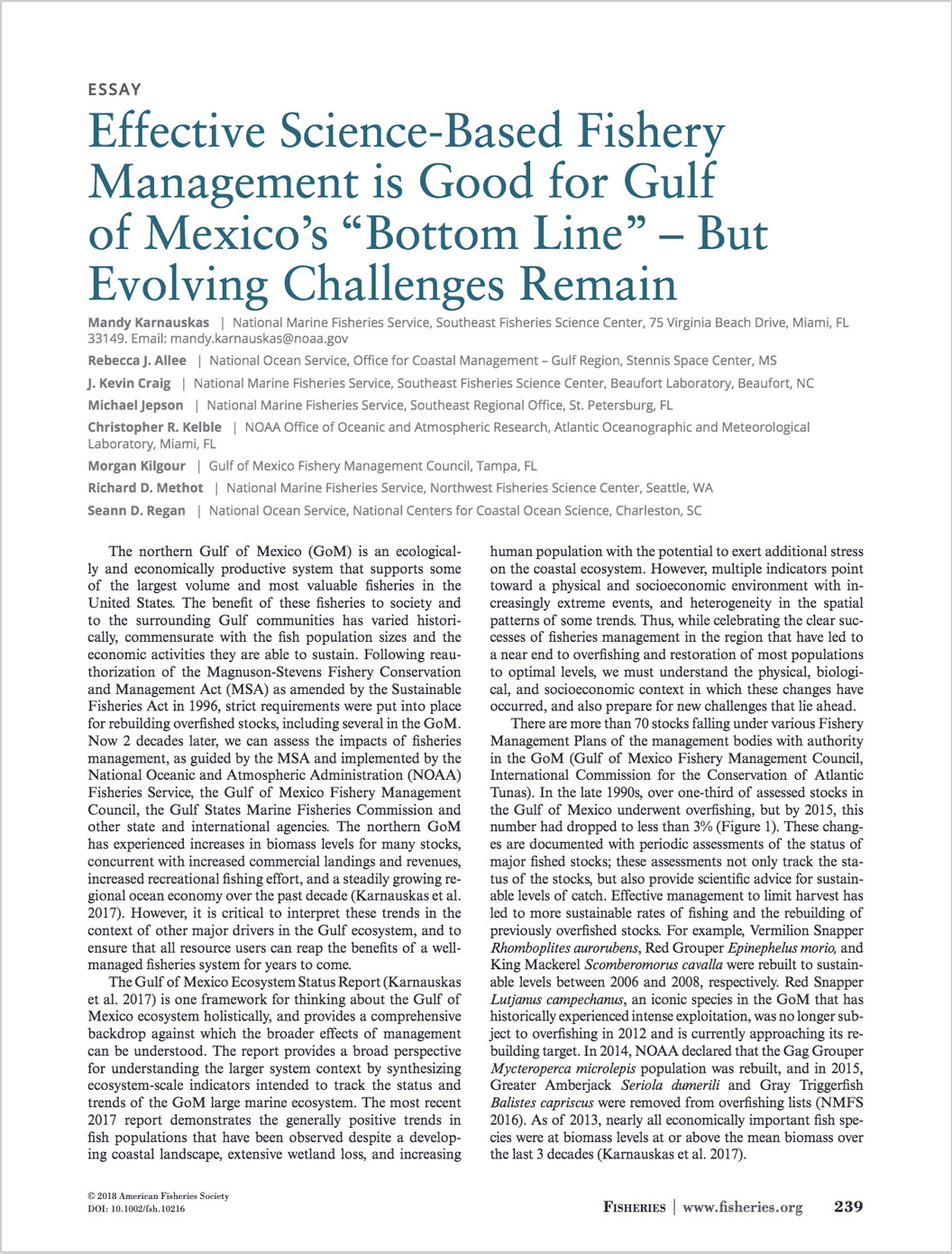 Introduction: The northern Gulf of Mexico (GoM) is an ecologically and economically productive system that supports some of the largest volume and most valuable fisheries in the United States. The benefit of these fisheries to society and to the surrounding Gulf communities has varied historically, commensurate with the fish population sizes and the economic activities they are able to sustain. Following reauthorization of the Magnuson‐Stevens Fishery Conservation and Management Act (MSA) as amended by the Sustainable Fisheries Act in 1996, strict requirements were put into place for rebuilding overfished stocks, including several in the GoM. Now 2 decades later, we can assess the impacts of fisheries management, as guided by the MSA and implemented by the National Oceanic and Atmospheric Administration (NOAA) Fisheries Service, the Gulf of Mexico Fishery Management Council, the Gulf States Marine Fisheries Commission and other state and international agencies. The northern GoM has experienced increases in biomass levels for many stocks, concurrent with increased commercial landings and revenues, increased recreational fishing effort, and a steadily growing regional ocean economy over the past decade (Karnauskas et al. 2017). However, it is critical to interpret these trends in the context of other major drivers in the Gulf ecosystem, and to ensure that all resource users can reap the benefits of a well‐managed fisheries system for years to come.