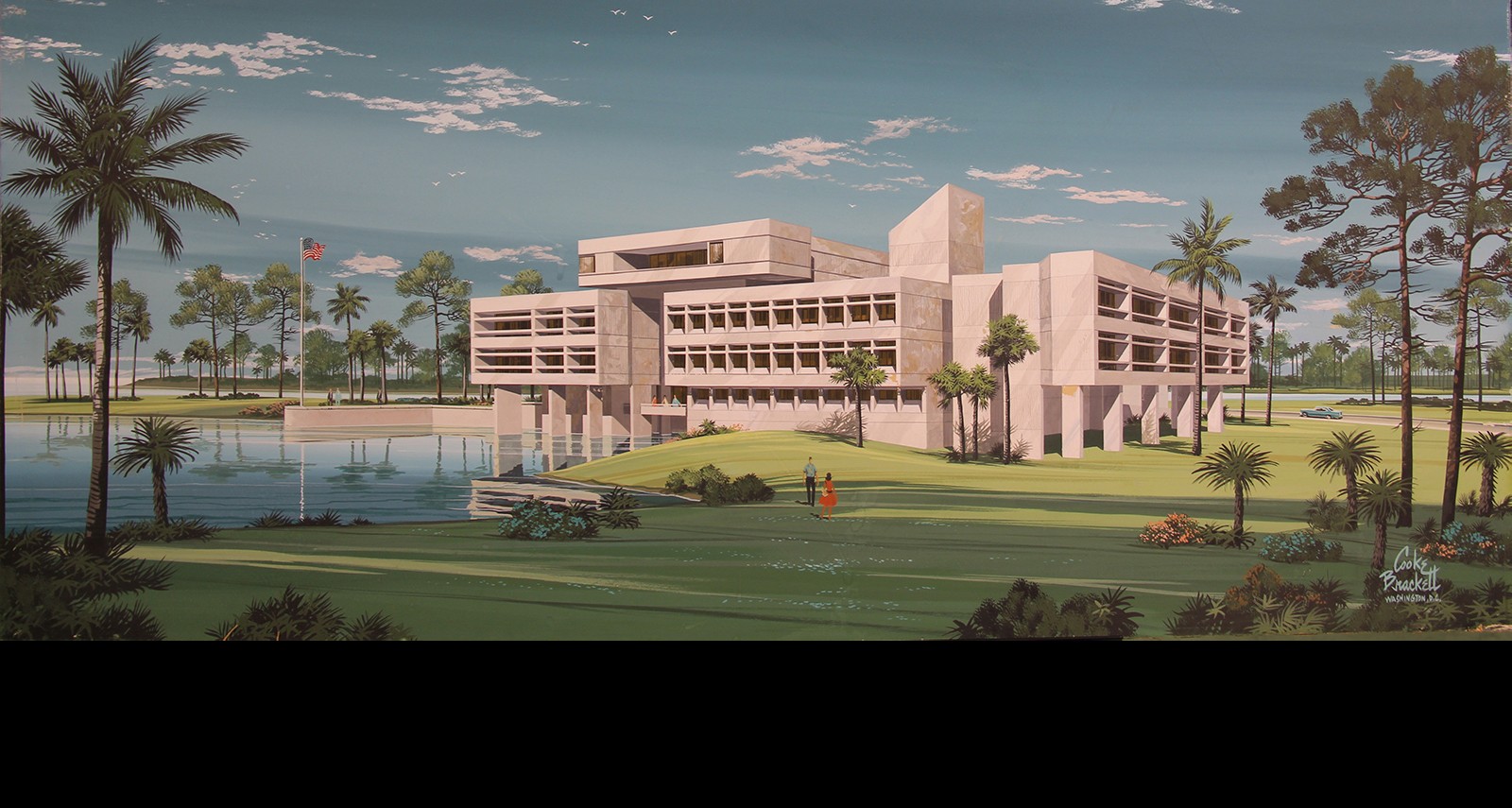 NOAA’s precursor, the Environmental Science Services Administration, made a decision to put a national laboratory and a ship base somewhere on the East Coast. In 1967, Miami was selected out of more than 120 sites and the initial process began. The ESSA broke ground in 1970 and construction was completed in 1972. AOML has since dedicated its resources to building one of the most prolific research profiles on coastal and ocean science. In addition, we have hosted and been home to scientists who have contributed greatly to our field, including some who are still pushing the boundaries of our science today. See the history of AOML’s leadership below.

A Legacy of Leadership 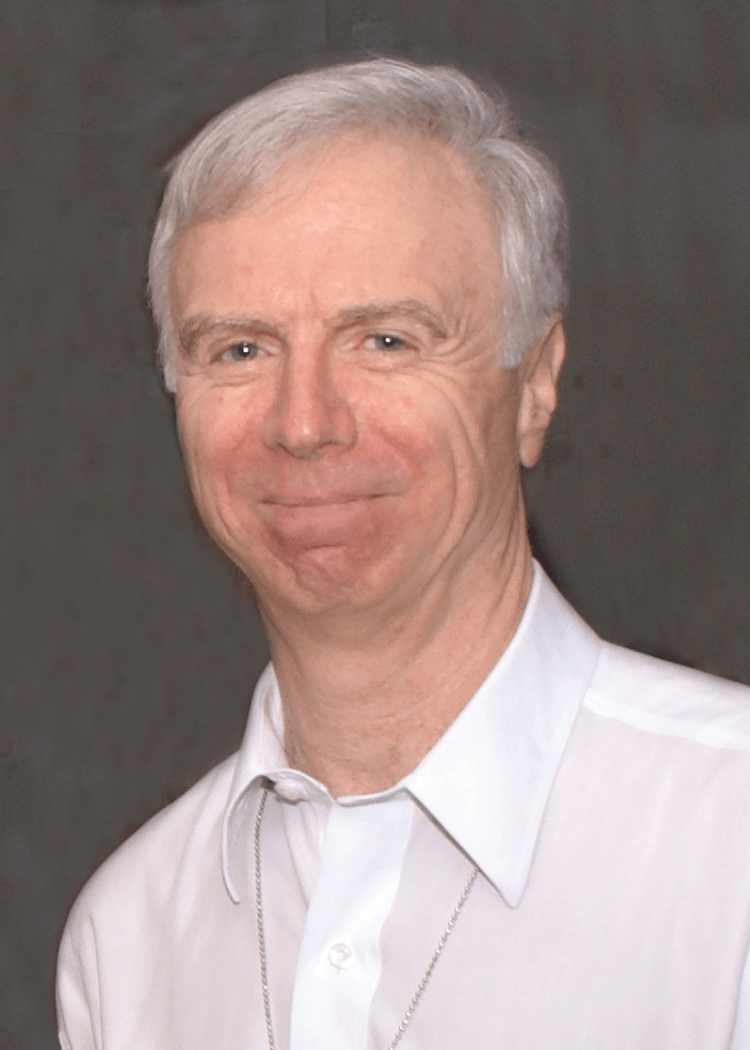 Dr. Robert Atlas retired as the Director of the National Oceanic and Atmospheric Administration’s (NOAA) Atlantic Oceanographic and Meteorological Laboratory in March 2019. In addition to managing the laboratory, Dr. Atlas was the director of NOAA’s Quantitative Assessment of Observing Systems Program and is a world expert in the use of Observing System Simulation Experiment (OSSE) systems for weather and oceans applications, a technology that enables scientists to determine the quantitative value of new observing systems before funds are allocated for their development. Dr. Atlas maintains an active research portfolio focusing on the prediction, movement and strengthening of hurricanes using satellite data and computer models as a means to study these hurricane behaviors.

Dr. Atlas received his Ph.D. in Meteorology and Oceanography in 1976 from New York University. Prior to receiving the doctorate, he was a weather forecaster in the U.S. Air Force where he maintained greater than 95 percent forecast accuracy. From 1976 to 1978, Dr. Atlas was a National Research Council Research Associate at NASA’s Goddard Institute for Space Studies, New York, an Assistant Professor of Atmospheric and Oceanic Science for SUNY and Chief Consulting Meteorologist for the ABC television network.

In 1978, Dr. Atlas joined NASA as a research scientist. He served as head of the NASA Data Assimilation Office from 1998-2003, and as Chief meteorologist at NASA GSFC from 2003-2005. Dr. Atlas has performed research to assess and improve the impact of satellite temperature sounding and surface wind data since 1973. He was the first person to demonstrate the significant impact of quantitative satellite data on numerical weather prediction. Dr. Atlas is a recipient of the NASA Medal for Excellence in Scientific Achievement and a Fellow of the American Meteorological Society. 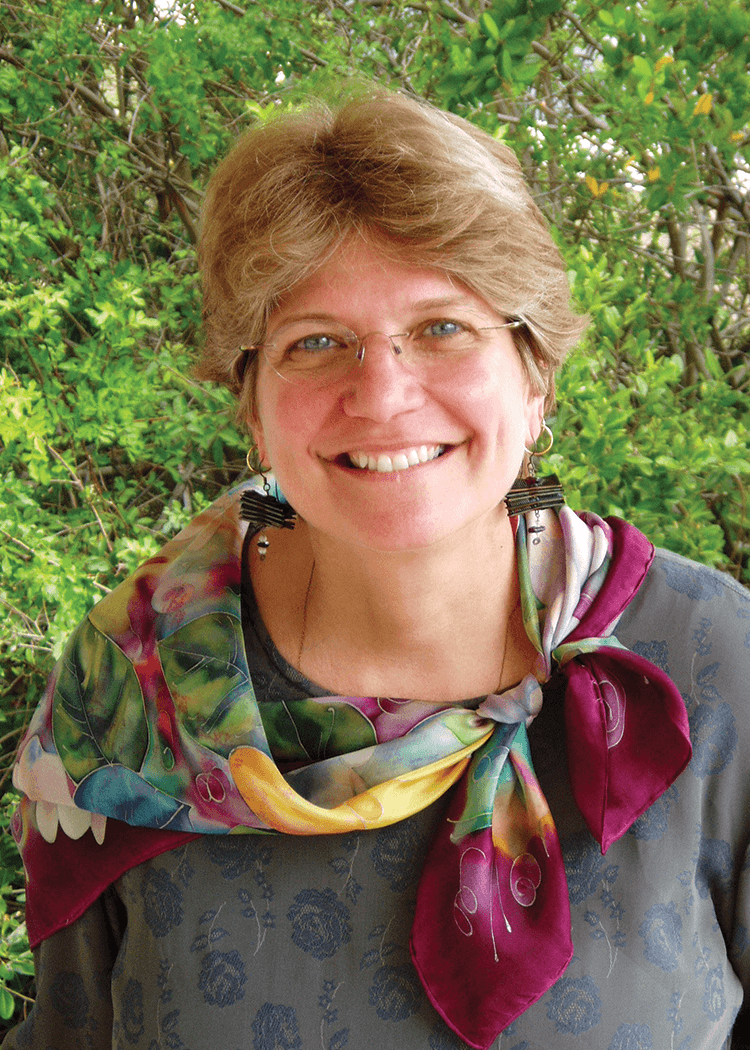 Judith Gray received her Bachelor of Science in Meteorology and certificate in Marine Sciences from Pennsylvania State University in 1978. She earned her Master of Science Degree in Atmospheric Sciences in 1983 from the University of Washington. She began her career as a research Meteorologist at the Pacific Marine Environmental Laboratory in Seattle, Washington studying Alaska coastal winds, mesoscale atmospheric variability, Pacific climatology and computer and statistical data analysis, among other subjects.

In 1992 she completed a one-year rotation in the Office of the Deputy Under Secretary for Oceans and Atmosphere with NOAA, and then relocated to Silver Spring, Maryland to serve as Acting Deputy Director for the Environmental Research Laboratories at NOAA’s the Office of Research. After that, she became the GLOBEC Program Manager working closely with NSF to manage a $7.5m multi-agency program to improve fisheries resource management. She became the Coastal Forecast System Program Manager for the Coastal Ocean Program in Silver Spring in 1995 in order to improve NOAA’s coastal forecasting capabilities for coastal winds, water, and air and sea temperatures on a region-by-region basis. She specialized in program design and promotion, funding solicitation and coordination of research.

In 1998 she became the Deputy Director of AOML where she managed a $15m research budget with 150 employees studying climate monitoring and prediction, hurricane dynamics and forecasting, oceanic and atmospheric chemistry, and ocean acoustics. She also managed the Facility, Administration, and Computer Networks and Services Divisions. She became acting director of AOML in 2004 and served until 2005. 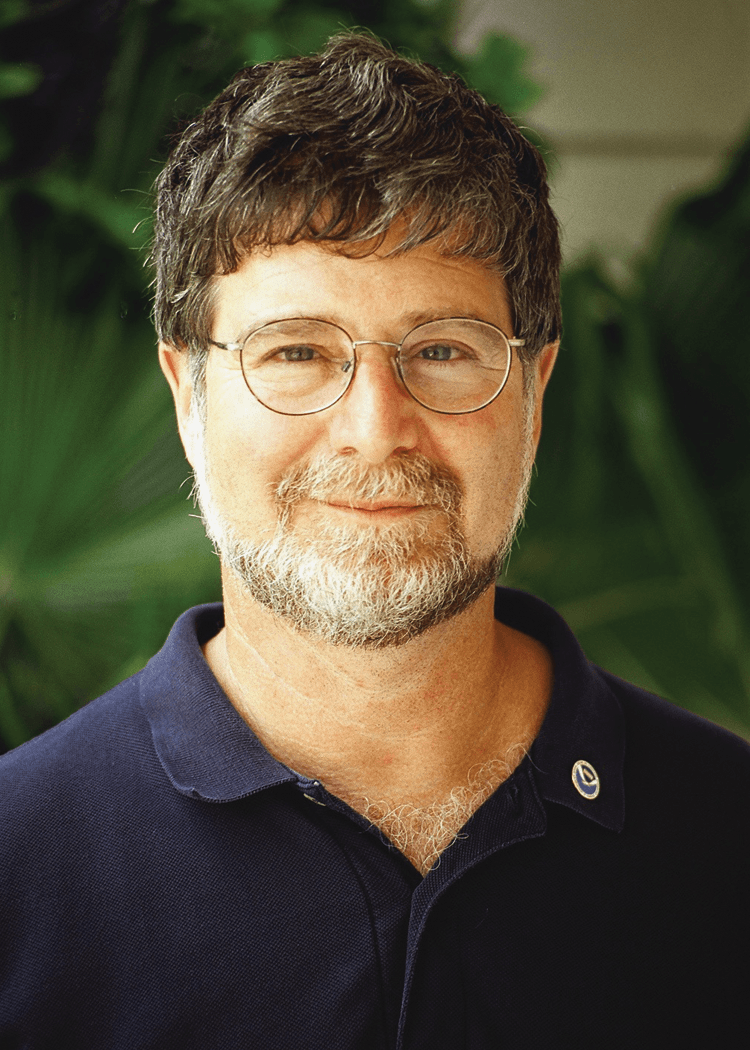 Peter Ortner worked as a research oceanographer for 27 years at NOAA’s Atlantic Oceanographic and Meteorological Laboratory in Miami, Florida. He served as the Laboratory’s Chief Scientist. Ortner holds a Ph.D. degree in biological oceanography from Woods Hole Oceanographic Institution (1978), a J.D. degree in environmental law from the University of Miami’s School of Law (1992), and a B.A. degree from Yale University (1970).

Ortner’s research focused primarily on biological oceanography and innovative sampling techniques of larval fish and zooplankton. His research also examined the water current structure and chemistry as it relates to the movement and migration of these species. As a NOAA scientist, Ortner’s most recent studies centered on South Florida’s coastal ecosystem and future changes as a result of upstream human impacts from South Florida communities and water management practices. 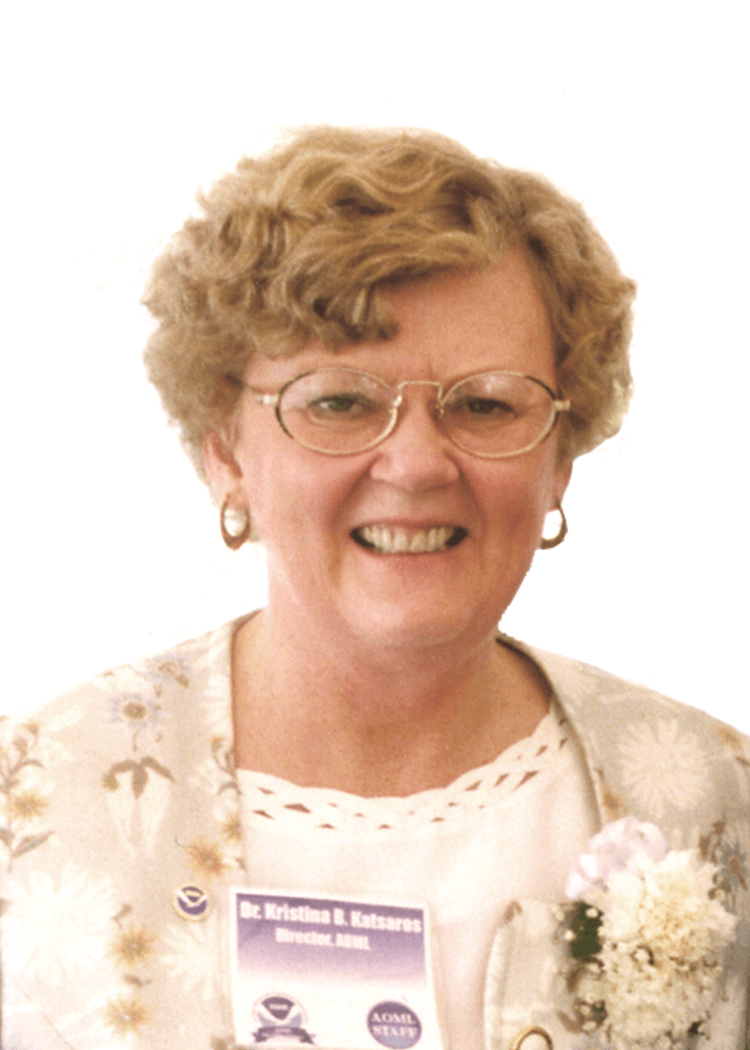 Kristina B. Katsaros spent 20 years as a faculty member of the Department of Atmospheric Sciences at the University of Washington and 5½ years as Director of the Department of Oceanography from Space at Insitut Francais de Recherch pour l’Exploitation de la Mer (IFREMER) in France. Her scientific pursuits include all aspects of air-sea interaction: turbulent and radiative fluxes, wave generation, surfactant effects, and a thesis project on the effects of rain on the upper ocean. She has performed laboratory as well as field experiments.

Since the launch of the SEASAT satellite in 1978, she has also employed active and passive microwave remote sensing for studies of storms, cloud systems, and the physics of wind and wave effects on microwave emission and backscatter from the sea surface.

She led a group at AOML that aimed to make full use of the observations by microwave instruments on aircraft and satellites for research within the Laboratory on oceanic circulation, climate scale variability, and hurricane development. This research involves cooperation with colleagues within other branches of NOAA, at the Jet Propulsion Laboratory, at IFREMER, at the Canada Centre for Remote Sensing and at the University of Washington. 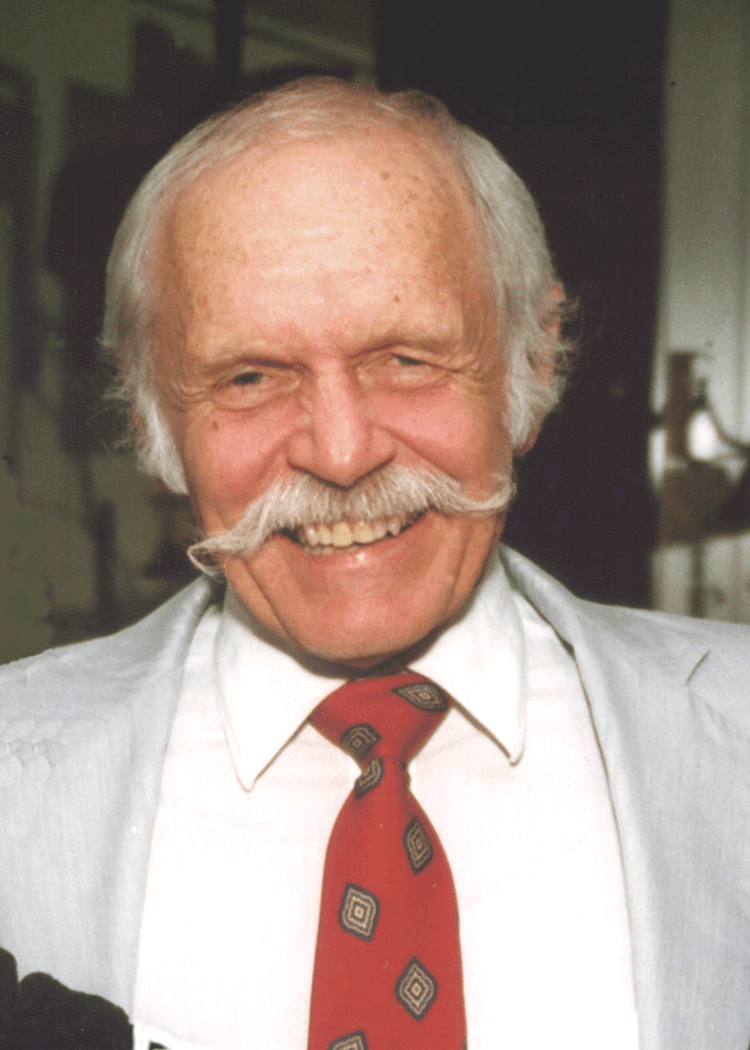 Hugo Bezdek joined the Scripps Institution of Oceanography in 1970 following completion of a degree in physics. After four years of projects in underwater acoustics and air-sea transfer, he became a program manager at the Office of Naval Research (and ceased, he says, doing the actual work). In 1980, he moved to another administrative position as Director of AOML. “During the last few years,” he reports, “I have realized the error of my ways and have been struggling mightily to redress past sins and return to honest work once again. With the help of generous people such as my co-authors, perhaps such an eventuality is possible.” 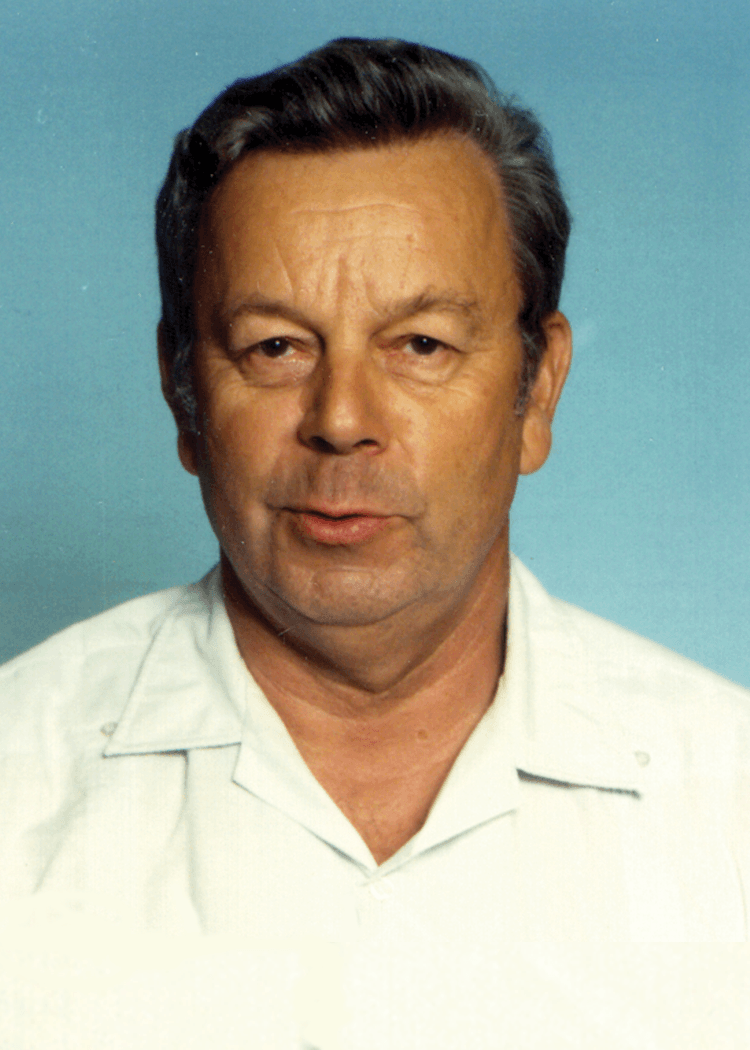 Dr. Donald V. Hansen was born in Seattle, Washington in 1931. He received his Bachelor of Science in 1954 and his Master of Science in 1961, both in Physics. He carried on to receive his Ph.D. in Physics from The University of Washington in 1964, meanwhile serving with the US Army Reserve as a Meteorological Officer. He was an engineer with the Boeing Company in Seattle, a ninth-grade teacher, and then a graduate teaching assistant at the University of Washington. He relocated to Silver Spring, MD and then to Miami to serve as a Research Oceanographer with AOML under the Environmental Science Services Administration.  His principal research was on the Western Boundary Currents of the North Atlantic. In 1970 Dr. Hansen was promoted to a supervisory role as Director of the Physical Oceanography Division. Under his leadership, the division grew from a staff of nine with a $250k budget to a staff of over 50 with a $2.5m budget.

In 1980, Dr. Hansen became Acting Director of AOML. His personal research was conducted to solve diverse problems of physical oceanography ranging from estuarine and coastal circulation and marine pollution problems, tides, deep ocean circulation, air-sea-interaction, and ocean observing technologies. He has served on several boards and committees as member, editor, and chair and was a fellow of AAAS, received awards from the NOAA Environmental Research Laboratories for Distinguished Scientific Authorship six times. 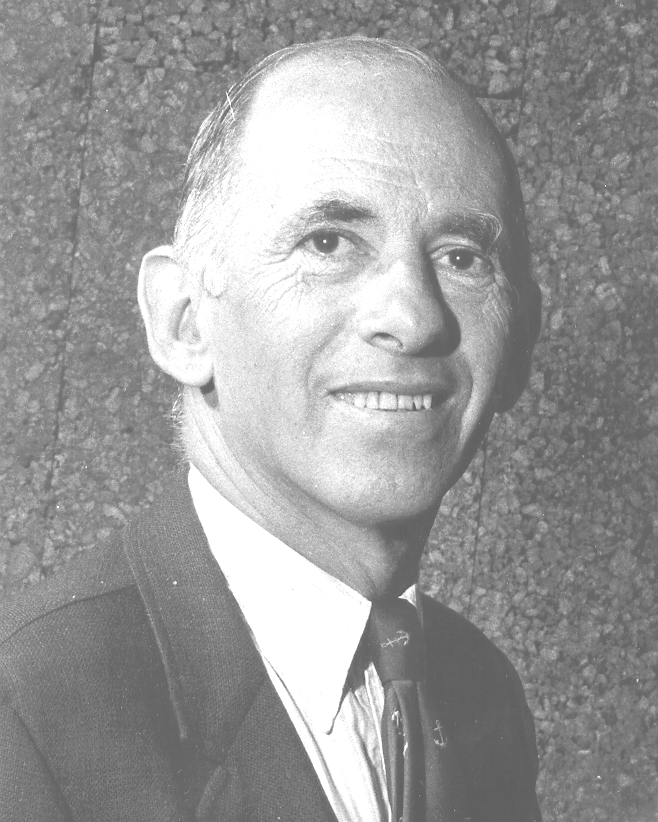 Dr. Harris B. Stewart, Jr. was AOML’s much beloved founder and first director. Dr. Stewart, or “Stew” as many called him, leaves behind a remarkable career in marine science that spanned more than 40 years and a multitude of caring friends and colleagues.

“The depth of loyalty and respect of his friends was unbelievable, and it was true all the way back to his school days. Stew achieved the near impossible goal of being both a brilliant scientist and charismatic manager.”

Dr. Stewart served as director of AOML until October 1978, at which time he retired from federal service. He was a prolific writer, publishing over 120 scientific articles during his years as a marine scientist. He also authored 12 books with topics ranging from oceanography, poetry, to humor. Dr. Stewart is survived by daughter Dorothy Barrett, son Harry, brother John, and countless numbers of colleagues, admirers, and friends.

Born in Auburn, New York in 1922, Harris Stewart entered Princeton University in 1941. After the bombing of Pearl Harbor on December 7th of that same year, Stewart interrupted his academic studies to enlist in the U.S. Army Air Corps. During his four years with the Air Corps as a transport pilot flying above the broad expanses of the Coral Sea and the islands of the southwest Pacific Ocean, he developed a deep respect and love for the sea. After the war, he returned to Princeton to earn a degree in geology and went to work for the U.S. Navy Hydrographic Office, participating in survey cruises in Kuwait and the Persian Gulf.

Stewart’s love of the sea led him to the Scripps Institution of Oceanography in the early 1950s where he earned a doctoral degree in oceanography. He became a certified scuba diver, participated in marine geology expeditions in the Gulf of Alaska and south Pacific, and also worked as a diving geologist for a group that performed underwater geological mapping off the coast of California. In 1957 he was called to Washington, D.C. to become the U.S. Coast and Geodetic Survey’s Chief Oceanographer.

His seafaring days continued with oceanographic research expeditions to the Caribbean Sea, South China Sea, and the Atlantic, Pacific, and Indian Oceans. The Department of Commerce created a new agency in 1965, the Environmental Science Services Administration (ESSA, forerunner of NOAA), formed primarily by merging the functions of the U.S. Coast and Geodetic Survey and the Weather Bureau. Dr. Stewart became Director of ESSA’s new Institute of Oceanography.

When ESSA announced its intention to build a multi-million dollar oceanographic research laboratory and ship base along the eastern seaboard in late 1965, Dr. Stewart was appointed Chairman of its Site Evaluation Committee. He chose Miami from over 100 potential sites, eventually relocating to Miami to become AOML’s Director, and bringing with him over 100 marine scientists and researchers. On February 9, 1973 AOML officially opened its doors.

Harris B. Stewart commissioned Jack Coggins to do a series of illustrations that reflected the work we did at AOML. Below is a gallery of the highlights of that collection.