A unique collaboration between Royal Caribbean Cruise Ltd (RCL) and the University of Miami’s (UM) Rosenstiel School of Marine and Atmospheric Science is amassing an incredibly valuable dataset highlighting the intricate connection between the ocean, atmosphere and climate. Over the past 20 years UM has benefited from many scientific collaborators in this endeavor, most importantly, NASA and the National Oceanic and Atmospheric Administration (NOAA) contributing their own scientific expertise and scientific equipment.

NOAA’s Atlantic Oceanographic and Meteorological Laboratory (AOML) installed and tested autonomous instruments to measure carbon dioxide in surface waters aboard the new Celebrity cruise ship, Flora, which is specifically designed for service around the Galapagos Islands. The first Galapagos cruise on the Flora departed June 30, 2019. The installation and calibration of the instrument were completed during the Flora’s inaugural voyage between the Canary Islands and St. Maarten, and numerous discrete samples were collected for analyses of additional carbon parameters back at AOML.

Royal Caribbean’s Explorer of the Seas was the first cruise ship outfitted with state-of-the-art ocean and atmospheric science instruments used to collect environmental data along its routes from Miami, Florida to the eastern and western Caribbean. Over the years, the program has evolved into an innovative academic-maritime industry alliance, called OceanScope, comprised of two universities—UM and University of Rhode Island—operating seven vessels, including cruise and container ships,  and ocean ferries that monitor the state of our oceans and climate.

“These ‘satellites of the sea’ are collecting invaluable data along extremely important routes that are significant to understanding ocean dynamics and vital to diagnosing the state of our oceans and planet,” said Peter Ortner, the UM OceanScope lead scientist and a UM Rosenstiel School research professor and director emeritus of the NOAA Cooperative Institute for Marine and Atmospheric Studies.

The highly sophisticated instruments placed strategically throughout the ships’ upper and lower decks collect oceanographic and meteorological data on fundamental ocean processes in the water column—from the very surface “skin” of the ocean to depths of more than 3,000 feet (1,000 meters). Weather balloons, capable of reaching altitudes as high as 12 miles (or 20,000 meters), were also periodically released from the rear of the Explorer during the first six years of the program to compare data from Earth-orbiting satellites above that measured water vapor in the atmosphere.

The key attribute of the venture is the continuous simultaneous collection of  the ocean’s vital signs such as the structure of currents, sea surface temperature, carbon dioxide concentrations, and salinity taken along the repetitive ship routes, which allows scientists to monitor changes on scales of seasons, years, and even decades.

“It’s vital to our mission as a company to protect the oceans for our guests and to ensure the long-term health of our planet,” said Jennifer Love, senior vice president environment, Royal Caribbean Cruise Lines. “This program allows us to truly be a partner in the exploration of the seas.”

When scientists began analyzing the OceanScope data, they discovered that they had a treasure trove of information on two important climate-related phenomena—the dynamics of the Gulf Stream and the storage of atmospheric carbon dioxide in seawater.

Climate models are predicting a slow-down of the Gulf Stream—a fast-moving current that runs up the U.S Atlantic coast as a result of global climate change.  The data collected on OceanScope vessels can help validate these predictions, which to date have not shown a statistically significant change in the current.

If we weren’t collecting data from the ships repeatedly traveling through the Gulf Stream, we would never be able to robustly document the actual change in the transport controlling regional weather patterns,

Another important finding from the OceanScope dataset was the rise in the amount of carbon dioxide (CO2) absorbed by Caribbean waters. The program aboard Explorer of the Seas collected over a  million CO2 measurements since 2002, the only continuous dataset of carbon dioxide in seawater in the Caribbean, to show that the for the first decade there was little CO2 uptake in the areas followed by a period of accelerated CO2 uptake. The cause of this unexpected pattern is still under investigation. The rapid increase of CO2 in seawater over the past 10-years  has turned ocean waters more acidic, a condition known as ocean acidification, which can have damaging effects on coral reefs that are a mainstay for ocean health and economic prosperity.

The initial idea of placing oceanographic instruments on a cruise ship was the brainchild of a former executive at Royal Caribbean International and a former dean of the UM Rosenstiel School who recognized the unique opportunity to conduct long-term ship-based sampling that is impossible to collect aboard traditional oceanographic vessels that only occasionally sample the same ocean regions. Their early collaboration was supported by NOAA, NASA, the National Science Foundation (NSF) and the Office of Naval Research (ONR) and included manned laboratories aboard the Explorer of the Seas with scientist-led talks and tours for passengers. Today, data gathering aboard the seven vessels of the current OceanScope fleet is completely automated, with data being sent back to scientists onshore via satellite.

“Sustained operations with automated instruments on a variety of platforms, including this innovative collaboration, is a key to maintaining the World Meteorological Organization’s Global Ocean Observing System to which  NOAA is a major contributor,” said Rik Wanninkhof, a NOAA senior scientist and ocean carbon expert at AOML.  “In particular,  the CO2, surface temperature and salinity data from the RCL ships  are major contributors to to these ocean observing networks.”

Other OceanScope data is being used to study the large masses of circulating water, known as eddies, that transport heat and energy throughout the ocean. Understanding how eddies develop and evolve is important to accurately portray the complexity of how the ocean and atmosphere interact in climate models.

Analysis of data from repeat transects of eddies in the Sargasso Sea is providing important information to verify and validate the next generation of climate models, 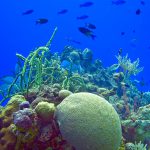 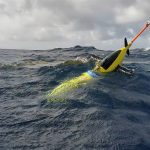 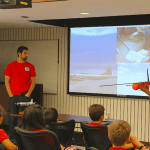 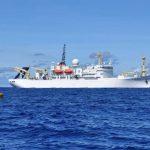 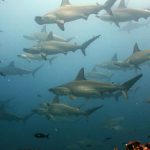 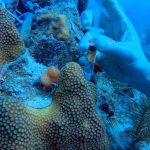 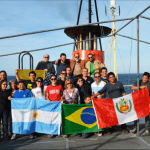 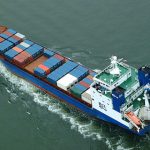