Jump to data collected during each storm.

Please review HRD’s Data Policy prior to downloading data. Most data available on this page are Level 2, quality controlled, data. Details on the Tail-Doppler Radar data can be found here.

Two Air Force operationally tasked missions by NHC into a Tropical Disturbance off the Florida coast.

10 Air Force operationally tasked missions by NHC and  6 NOAA missions into Tropical Storm Fred.  For the 5 P3 and 1 GIV NOAA flights there were:

EMC-tasked mission from Lakeland to Aruba

EMC-tasked mission from Lakeland to Aruba

AOML HRD missions for Tropical Storm (TS) Grace began on August 14th and continued until August 19th, 2021. Multiple observation systems were deployed during the missions for TS Grace. There were a total of 30 dropsondes and five airborne expendable bathythermographs (AXBTs) deployed.

During the first flight on August 14th, an interesting observation was that the disturbance appeared to exhibit multiple vorticity centers at low-levels. The “southern” low-level vorticity center was actually aligned with the midlevel center. The goal of the second flight, which flew on August 15th, was to identify the center of circulation of Hurricane Grace. Rather than finding a clear center, data showed that the storm had an elongated circulation center or wave axis that made it challenging to fix an actual closed center.

Ferry flight for missions into PTC#7 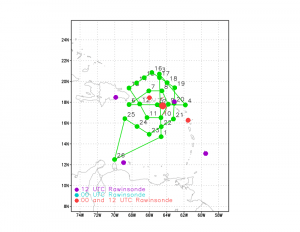 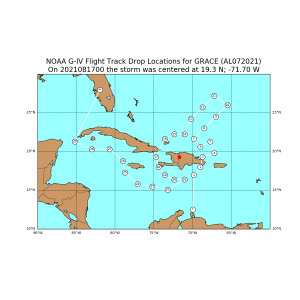 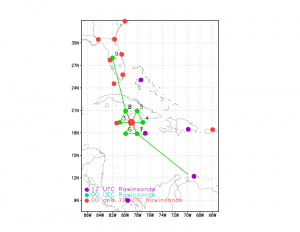 7 Air Force recco missions and 4 NHC-tasked G-IV flights. There were 3 NOAA operationally tasked missions by EMC into Henri that deployed:

AOML HRD missions for Hurricane Henri occurred on August 20th to 21st, 2021. During the missions into Hurricane Henri, there was also a Saildrone passing through Henri’s track at the ocean surface leading to the collection of data and observations above, within, and below the hurricane.  Additional technology from AOML PHOD was used during Hurricane Henri, such as multiple hurricane gliders, one saildrone, and three drifters with pressure sensors.

Hurricane Ida, one of the most notable storms of the 2021 hurricane season, was monitored by both CPHEX and APHEX missions spanning from August 24th to August 29th. The CPHEX mission carried out on August 24th followed a “lawnmower” track which sampled convection in the southern Caribbean associated with AL99, which became Ida. Dropsondes were deployed and detected significant dropouts below 850 mb. On this mission, CEPHEX also completed an ADM-Aeolus underflight. During the second CEPHEX mission on August 26th, the crew flew another ADM-Aeolus transect where the images showed data from HALO (High Altitude Lidar Observatory) and HAMSR.

APHEX missions into Hurricane Ida began on August 27th and went until August 29th. The goals of the first mission were to work on Convective Burst Structure and Evolution and the Stratiform Spiral Module all in collaboration with ONR and TCRI. During this flight the crew sampled a newly forming region of thunderstorms on the north side of Cuba as Ida was coming offshore to see how this new region would impact the eyewall development. There were multiple missions flying into the eye of Hurricane Ida as it approached the Louisiana coast on August 29th. The data collected during these flights were very important for better understanding rapid intensification of tropical cyclones.

Reports from AOML PHOD showed that Ida travelled over several Argo floats during its full track and over one hurricane glider in the northern Gulf of Mexico. 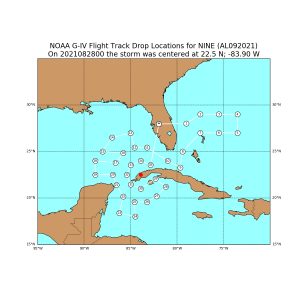 5 Air Force NHC-tasked reconnaissance flights. There was one NASA DC-8 mission for their CPEX-AW project. 2 NOAA P3 and 3 GIV missions for APHEX were flown into Hurricane Larry.

Flights into Hurricane Larry were held September 5th through 7th, 2021. The first mission on September 5th and the second mission on September 6th were successful in targeting the early stage of the tropical cyclone diurnal cycle evolution and targeting the later stage of the TC diurnal cycle evolution, respectively. On the third mission the goal was to collect dropsonde observations in the environment/near environment of Hurricane Larry to validate against NOAA NUCAPS temperature and moisture soundings from the Aqua satellite and TDR data. At the end of the mission Chris Barnett, JPSS collaboration Co-lead, said “All-in-all this was a great investment and I already sent these summaries to the JPSS management so they know we got something valuable here.”

Ferry flight from Lakeland to St. Croix for APHEX missions around Hurricane Larry.

The NOAA G-IV flew a successful Tropical Cyclone Diurnal Cycle Experiment to examine how day-night fluctuations in radiation affect the intensity and structure of hurricanes.  One component of these oscillations is a phenomenon called the tropical cyclone diurnal cycle where the cloud fields of storms are seen to expand and contract each day.

Flight Cancelled due to mechanical problems.

Hurricane Sam was the strongest storm to date in the 2021 hurricane season. During these missions, scientists found Sam to be a small storm that packed a punch, measuring up to category 5 wind speeds. There was also frequent inner core lightning and graupel (frozen rain) at 10 kft.

During the flight on September 26th, the crew captured secondary eyewall formation. However, post-flight the storm weakened dramatically with a possibility of undiagnosed shear forcing dry air into the core. The mission on the 29th was a treasure trove for research. The APHEX team focused on the Mature Stage Modules such as the stratiform spiral, sainband complex, gravity wave,  surface wind and wave validation (WSRA), and sustained & targeted ocean observations using AXBTs and  ALAMO floats. Hurricane Sam passed over a saildrone which collected the first-of-its-kind ocean surface data. This included videos of 50 ft waves and 120+mph winds. 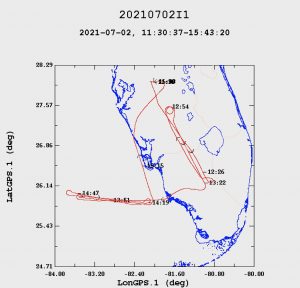 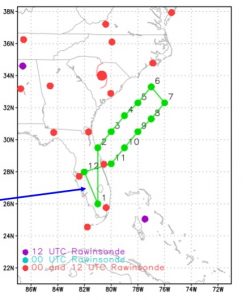 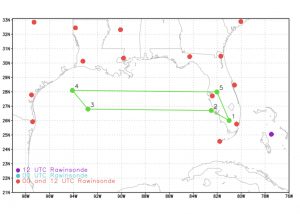 One Air Force operationally tasked mission by NHC into Nora.

Mission aborted due to computer problems