While the North Atlantic is the sole provider of North Atlantic Deep Water (NADW) to the global ocean, the South Atlantic is also the sole recipient for upper and bottom waters flowing into the North Atlantic to balance the NADW export (Speich et al., 2007). Export of NADW to other ocean basins is compensated for by net northward flow through the South Atlantic and across the equator of surface, intermediate and bottom water layers (Broecker, 1991; Schmitz, 1995, Speich et al. 2007). The relevance of the SA to the MOC depends on whether these circulation passages are affected by their passage through the basin. Modifications of the water masses participating in the return flow within the South Atlantic can potentially lead to alterations of the thermohaline circulation and the associated meridional heat and freshwater fluxes. Diapycnal advection and mixing may be effective short circuits of the Meridional Overturning Circulation (MOC) (Ganachaud and Wunsch, 2003).

Several projects, which include analysis of in-situ observations, satellite observations, and modelling efforts, are being carried out at PhOD to monitor and investigate the variability of the MOC in the South Atlantic. In addition, a series of international workshops were conducted to discuss how the present observation systems may contribute to estimate the meridional and inter-basin fluxes of mass, heat and salt; how the present array ought to be upgraded to better capture these fluxes and their variability; and how to transition from the initial array to a long-term sustained program. The workshops discussions were aimed at determining what parameters should be observed, how to implement the best possible observation strategies, where are the observations needed, and who will be interested in carrying them out. Results of the discussions and pertinent bibliography can be obtained at the SAMOC workshop and project webpages.

SAMOC is an international initiative to study the role of the South Atlantic in the Meridional Overturning Circulation. For additional information: Go

The Southwest Atlantic Meridional Overturning Circulation Program (SAM), which began in 2009, seeks to capture key components of the AMOC in a hitherto under-sampled region - the South Atlantic Ocean. Go 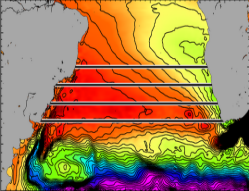 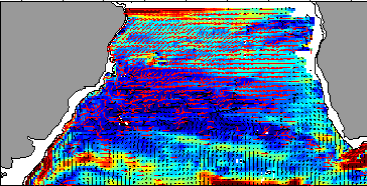 Project to analyze multiple models and determine the optimal design and location for a zonal trans-basin array that will characterize the variability of the Meridional Overturning Circulation (MOC) and meridional heat transport (MHT) in the South Atlantic. Go

This project investigates the role of Ekman and geostrophic transports, as well as the overturning and horizontal transports, in observed and simulated Atlantic Meridional Overturning Circulation (AMOC) and Meridional Heat Transport (MHT). Go

Satellite altimetry observations are used in this project to assess the temporal and meridional changes of the MOC in the South Atlantic Ocean. Go

Our research focuses on the analysis of state-of-the-art eddy-permitting and eddy-resolving NOAA/GFDL model simulations to characterize the pathways of the upper and lower limb of the MOC in the South Atlantic and identify the dynamical mechanisms that control these pathways. Go