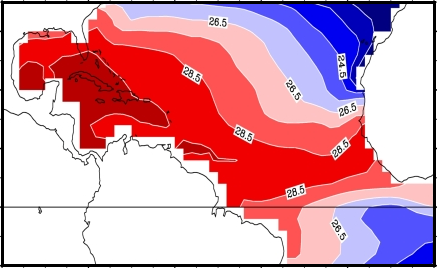 The Atlantic warm pool (AWP) is a large body of warm water comprising the Gulf of Mexico, the Caribbean Sea and the western tropical North Atlantic. AWP variability has a large impact on weather in the Western Hemisphere, rainfall in the central United States and extreme events such as hurricane activity and drought/flood in North America. This project studies AWP variability, mechanism and predictability. Go 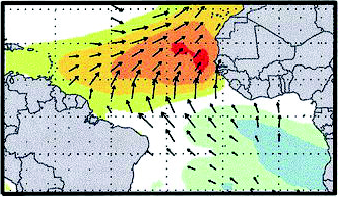 The Atlantic Meridional Mode (AMM) is the dominant source of coupled ocean-atmosphere variability in the Atlantic. The AMM affects rainfall in Northeast Brazil and tropical cyclone development in the North Atlantic. This project focuses on understanding the mechanisms that drive interannual to decadal variability of the AMM and the interaction between the AMM and other modes of tropical Atlantic variability. Go