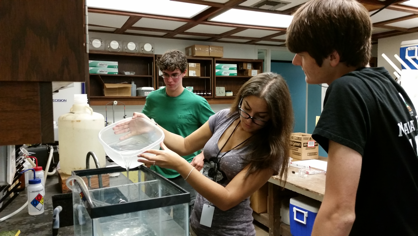 MAST Academy interns Arturo Toro, Michelle Mestres, and Ryan Winslow from MAST Academy set up the experiment to illustrate some of the effects of changing salinity on density and the buoyancy of objects. (credit: NOAA/AOML)

Three summer interns collaborated with AOML’s Physical Oceanography Division to develop a hands-on outreach demonstration experiment that will be a useful tool to educate future visiting K-12 students. The students presented their demonstrations and associated research as a conclusion to their 8 week-long summer internship with NOAA scientists at AOML. The students attend MAST Academy, a Maritime and Science Technology magnet high school in Miami-Dade county co-located with AOML on Virginia Key. The interns’ experiment illustrates some of the effects of changing salinity on density and the buoyancy of objects. It will help teach students about topics in physical oceanography such as the Atlantic Meridional Overturning Circulation (AMOC), the Mediterranean Sea outflow, and how floats, drifters, and gliders use density and buoyancy to determine their positions in the water column.

To begin the demonstration, the interns first divided a rectangular fish tank into two halves using a plexiglass panel with closed stoppers in holes near the top and bottom.  One half was filled with room temperature salt water, while the other half was filled with warm fresh water.  They dropped objects of varying densities into the divided tank in order to see which would float, and which would sink.  For example, a small flask filled with fresh water sank to the bottom of the lighter fresh water but floated on top of the denser salt water.  After using green food coloring to mark the denser salt water, the interns then removed both stoppers. This created a simple overturning circulation effect, where water flowed from the fresh to salty side of the tank through a hole near the top, and flowed from the salty to fresh side of the tank through the hole near the bottom. Eventually, the circulation resulted in a layer of fresh water lying above a layer of salt water.

The interns then dropped flask filled with fresh water into either side of the tank, they observed it dropping through the fresh water and floating at the top of the salt-water layer.  To further illustrate this effect, a balloon filled with warm, lighter fresh water and red food coloring was placed into the tank and held near the bottom.  When the balloon was popped in the lower layer, the colored water mixed with the surrounding salt water, becoming brackish, and rose part way to the surface, finally settling at the saltwater-freshwater interface.

“The balloon popping is my favorite part,” said Ryan Winslow, one of the MAST interns. “It shows how the liquid is dispersed in a random pattern but then reorganizes itself to create a medium between the two types of water”

In future repetitions of these experiments more precise measurements of the temperature and salinity of the water could be made, allowing for a better means of calculating the density differences between the water in the tank and in the various objects used.  During the buoyancy experiments, scientists could also better account for the effects of the weight of the objects (jars, balloons, etc.) themselves and any air that was contained within them.

In addition to their outreach demonstration, facilitated by AOML oceanographer Renellys Perez and ocean engineers Grant Rawson and Andy Stephanick,  the three interns worked with other PhOD scientists this summer to learn about some of the research conducted by the division. Michelle Mestres worked with Gustavo Goni and Libby Johns to learn about the emerging field of Glider technology. Ryan Winslow interned with Molly Baringer and examined ways in which data from the Repeat Hydrography program can be used to study heat content in the ocean. Arturo Toro assisted the engineering group with a variety of ongoing projects. 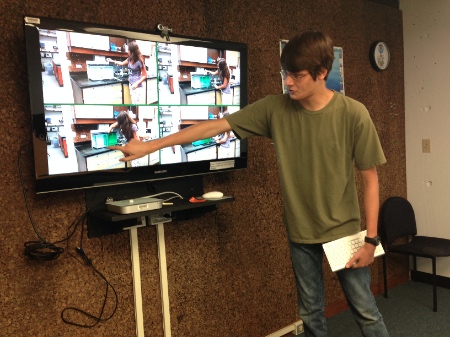 Intern, Ryan Winslow, gives a powerpoint presentation on his project and
explains what he learned durning his summer at AOML. (credit: NOAA/AOML)