On Posted on May 12, 2016August 20, 2021 by AOML Communications to Physical Oceanography, Research Partnerships 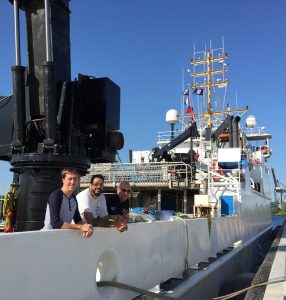 A team of NOAA oceanographers sets sail from Miami aboard the NOAA Ship Nancy Foster on May 7th to investigate ocean currents and fish larvae distribution in the southern Gulf of Mexico and western Caribbean. The joint cruise between NOAA’s Atlantic Oceanographic and Meteorological Laboratory (AOML) and Southeast Fisheries Science Center (SEFSC) is a new chapter in a long-term effort that pools cross-line office resources to better understand the early life history and larval recruitment pathways of important fisheries in the region, including the ecologically important and commercially valuable Atlantic bluefin tuna.

“Cruises like this one are critical to the understanding and protection of the Atlantic bluefin tuna,” said Ryan Smith, an oceanographer at AOML. “We have a lot invested in the sound management of this species.”

The May – June 2016 cruise will sample data-poor regions of the southern Gulf of Mexico and western Caribbean outside of the primary Atlantic bluefin tuna spawning region in the Gulf of Mexico.  These data will help researchers to identify additional areas of Atlantic bluefin tuna spawning activity and help to improve larval habitat models for the species. NOAA, along with the International Commission for the Conservation of Atlantic Tunas (ICCAT), uses the larval abundance data collected from the surveys to calculate and improve tuna stock assessments.

In addition to sampling for Atlantic bluefin tuna, this year’s survey will also sample for economically important reef fish species such as grouper and snapper.  Identifying the role that major current systems play in the dispersal and retention of these species is critical for population connectivity assessments and the development of adaptive management strategies for regional marine protected areas. During the survey, scientists aboard the Nancy Foster will use data from satellites to monitor the position of major regional currents.  These data will be compared with measurements collected by the ship’s hull-mounted acoustic Doppler current profiler (ADCP) to determine optimal sampling locations in relation to the circulation features observed.

Following their work in the western Caribbean, AOML and SEFSC researchers will also conduct sampling for economically important larval reef fish species around the U.S. Virgin Islands. NOAA will partner with the University of the Virgin Islands and the Department of Planning and Natural Resources in St. Thomas to study various species including snapper, grouper, and parrotfish. The long-term sustainability of these fisheries in the Virgin Islands and surrounding regions will depend on a comprehensive understanding of regional spawning and larval dispersal patterns. Data collected during the 2016 cruise in the U.S. Virgin Islands will contribute to a growing baseline of data recorded for various species across the region (initiated in 2007). As the dataset grows, it will allow researchers to develop indices of abundance for the species and enable examination of the relation between managed and non-managed areas across the region.  This information will aid resource managers in assessing the effectiveness of various fisheries management strategies for the regional spawning aggregation sites.