On Posted on February 28, 2020August 23, 2021 by AOML Communications to Physical Oceanography

AOML is preparing to deploy two autonomous data pod systems with Pressure Inverted Echo Sounders near the eastern boundary of the North Atlantic during March 2020.  This will be the first full scale operational deployment of data pods, with a goal of providing a low-cost solution for the sustained Atlantic Meridional Overturning Circulation monitoring without the continuous use of a research vessel.

Designed by AOML engineers to address the challenges of limited access to ship time for data retrieval, each system is programmed to release a data pod about once a year and transmit the collected data as it arrives at the surface.  The Eco Sounders are acoustic instruments placed on the seafloor which measure bottom pressure and the time it takes for a sound pulse emitted by the instrument to travel to the ocean surface and back. Data from these Echo Sounders will complement those from the current projects in the North Atlantic basin, and provide the time series of the full depth heat content at the eastern boundary.  It will also facilitate studies on the heat-redistribution in the Atlantic Meridional Overturning Circulation which is an important component of the Earth climate system and its variability impacts changes on the climate. 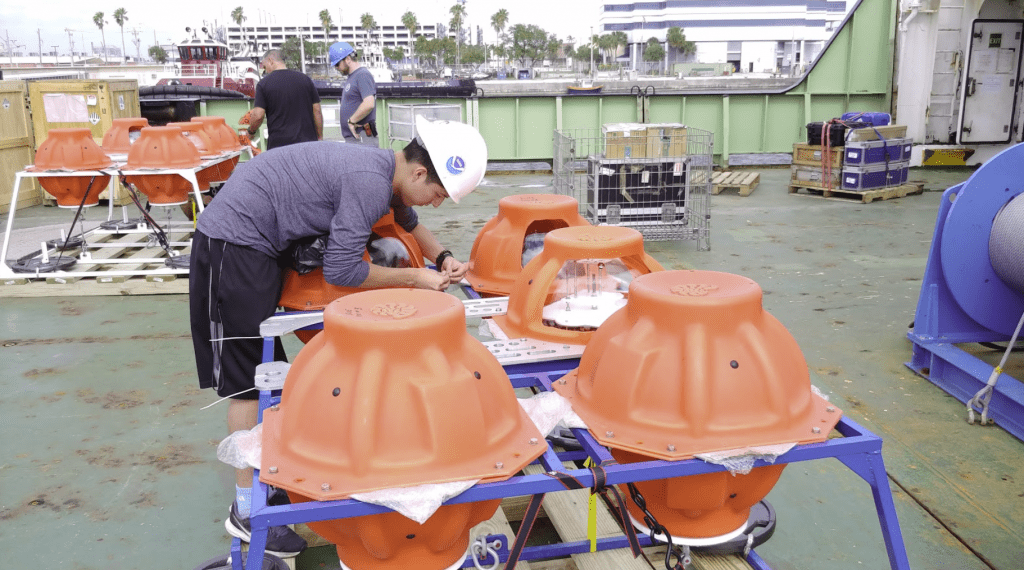 The two data pod systems were loaded on the British oceanographic vessel James Cook in January 2020, and are now on the way to the Canary Islands, Spain.  AOML engineers, Ulises Rivero and Pedro Pena, will travel to the Canary Islands to prepare the equipment for deployment.

The last of the pods is programmed to be released in 2024.  As ship time to retrieve data using traditional methods becomes increasingly expensive and difficult to reliably schedule, the data pods may become one of the only viable solutions to retrieve data from bottom-moored instruments.  If this field deployment is successful, the project will join the AOML Western Boundary Time Series project, combining data obtained at both boundaries of the Atlantic basin to aid in the detection of long-term changes in the ocean.

This project is funded by a NASA grant and AOML, and led by CIMAS scientist Denis Volkov.