On Posted on August 6, 2014August 20, 2021 by AOML Communications to Physical Oceanography

There are currently over a thousand drifters circulating in the world ocean measuring sea surface temperature and other data as ocean currents carry them along. These currents carry heat from place to place around the ocean basins, which affects regional climates. Drifter velocities are derived from finite differences of their position fixes. These velocities and their concurrent sea surface temperature measurements are archived at AOML’s Drifting Buoy Data Assembly Center where the data are quality controlled and interpolated to quarter-day intervals. While satellite technology makes it possible to obtain sea surface temperature measurements from space, drifters are needed to ensure the measurements are accurate. Without drifter observations to correct satellite measurements, dust and other aerosols in the atmosphere can cause errors.

Approximately half of the drifters also measure air pressure, and send the data to weather centers for improved marine forecasts.  A smaller number of drifters have been deployed to measure other properties such as surface salinity and heat content in the upper 150m of the ocean.  Drifters have been air deployed in the paths of hurricanes and typhoons to measure how the ocean and atmosphere interact during storm passage and to improve intensity forecasting. 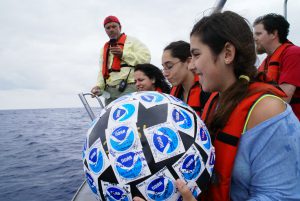 Each drifter is part of a global ocean array that can be followed online. AOML’s component of the Global Drifter Program consists of the Drifter Operations Center (DOC) and the Drifter Data Assembly Center (DAC). The DOC manages global drifter deployments, using volunteer ships of the Ship Of Opportunity Program, research ships and aircraft. The DAC verifies that the drifters are operational, distributes the data to meteorological services, assembles, quality controls and makes the data available on the web, and offers drifter-derived products.

Map of drifter trajectories in the North Atlantic. (credit: NOAA/AOML)

Using more than 30 years of observations obtained from satellite-tracked surface drifting buoys, NOAA scientists derived a global climatology of seasonally varying ocean surface currents at one-half degree resolution. This data set can be used to better understand how the ocean transports properties such as heat, salt, and passive tracers, and as a reference for studying changes in ocean currents over time.

Congratulations to Rick Lumpkin & Mayra Pazos, awarded as OAR Employees of the Year!

Rick Lumpkin and Mayra Pazos of PhOD won the 2013 OAR Employee of the Year Award.  The award was given to recognize the Global Drifter Program’s federal employees, Rick Lumpkin and Mayra Pazos, for their efforts to improve the quality of the drifter data by developing a new methodology to evaluate when drifters have lost their drogues.  This reevaluation required manual examination of time series from over 14,000 drifters, to determine cases in which the drogue lost time was misdiagnosed, and to reassess those times.  The reevaluation was initiated in April 2012 and concluded in April 2013, and publicly-available metadata files containing drogue off dates were revised 16 times during that period to distribute the most recent results. Published results by Lumpkin et al. (2013) indicate that the revised data set is significantly improved, with spurious low-frequency current variations in places like the Southern Ocean now no longer present.  Research papers published by Rick Lumpkin while addressing the problem have been cited in more than 28 peer-reviewed publications so far. 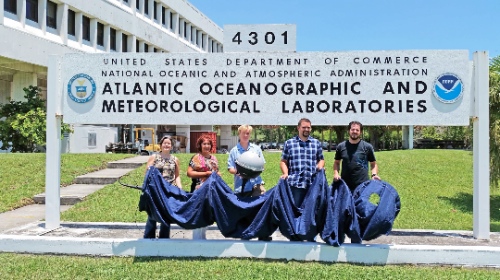 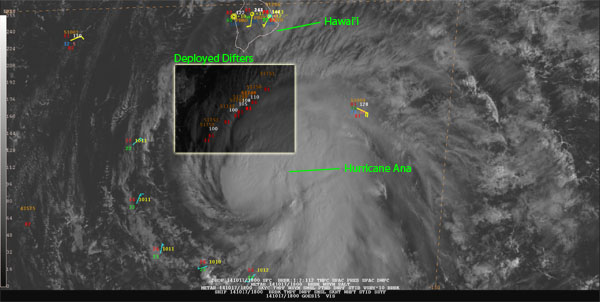 On Friday, October 17, as Tropical Storm Ana strengthened and moved towards the Hawaiian Islands, Air Force Hurricane Hunters deployed 10 drifting buoys in her path. Ana was forecasted to become a hurricane as it passed over the drifter array on her way to the main Hawaiian Islands.

Data from 9 of the drifters was successfully retrieved, providing wind speed and direction, barometric pressure, ocean temperatures to 150m depth, and ocean currents in the mixed layer.  The data from these drifters will reveal the strength of the storm, the structure of its oceanic wake, and will help improve hurricane intensity forecasting models with an active ocean component. NOAA’s Global Drifter Program coordinated these deployments.