The game plan: where we are and where we need to be

NOAA’s Aircraft Operations Center (AOC) maintains two P-3 Orions and a Gulfstream IV jet for hurricane observations. To collect data, NOAA’s hurricane researchers fly aboard these aircraft into and around the periphery of storms. A primary tool they use for measuring the hurricane environment is the dropsonde, a lightly weighted cylindrical tube equipped with a parachute and global positioning system technology. Dropsondes transmit their position every half second as they drift through a storm. These mini-weather stations are deployed from the belly of the aircraft and fall towards the ocean, sending data such as pressure, temperature, wind speed, wind direction, and moisture to scientists aboard the hurricane hunter aircraft. 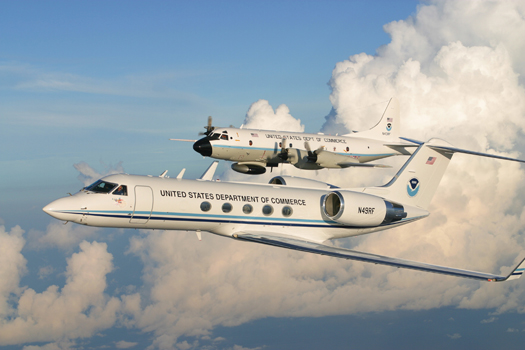 While dropsondes are an excellent tool for measuring a storm’s atmospheric environment, their spatial coverage is limited. Dropsondes essentially obtain vertical profiles of a storm at discrete points. Other instruments on the aircraft measure storm properties at altitudes as great as 60,000 feet. However, NOAA’s hurricane hunter aircraft are unable to fly below 5,000 feet due to the extreme turbulence occurring between the ocean and atmosphere. This leaves a gap in the opportunity to collect potentially important data from the lower part of the storm, which may be essential to increasing the understanding of intensity change.

Post-Hurricane Sandy federal funding, the Disaster Relief Appropriations Act of 2013, provided NOAA with the opportunity to test new technology in hopes of better understanding and evaluating storm physics that drive intensity change. An unmanned weather drone, called the Coyote, will do just that.  The Navy originally designed the Coyote for maritime surveillance. NOAA plans to transition this unique platform into a “smart sonde” that can be used for hurricane science. During the 2014 hurricane season, the Small Unmanned Aircraft Vehicle Experiment will test the capability of the Coyote in storms, observing how well it handles severe winds and the harsh hurricane environment. 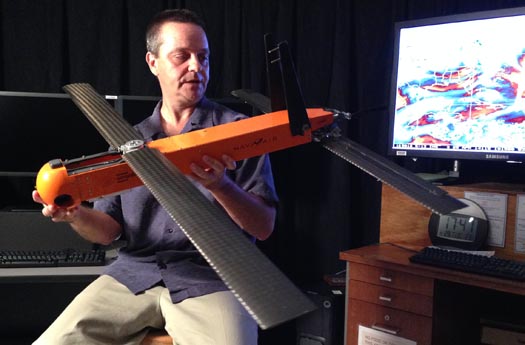 Scientists will deploy the seven pound unmanned aircraft from the P-3 Orion in the same way as the dropsondes. However, instead of drifting downward towards the ocean surface, the Coyote will open its six-foot wingspan and fly through the storm.  It can be controlled from miles away but will typically be piloted by scientists onboard the P-3s. Its relative lightweight design requires the Coyote to fly with the wind currents, but it will be directed up, down, and sideways to navigate specific flight patterns to measure the inner core and lowest altitudes of the storm.

Hurricanes are fueled by warm ocean water, and vital information needed to better understand and predict intensity change may rest close to the sea surface where manned aircraft cannot fly and the dropsondes only pass through for a few seconds. With its ability to fly for two hours in this region, the Coyote provides the opportunity for much more complete data collection, in comparison to the traditional dropsonde.

Diving into the ocean to improve hurricane forecasts

The 2014 season will also feature two sea gliders, remotely operated profiling instruments that dive below the ocean surface and then resurface to transmit observations of temperature and salinity. NOAA is testing two ocean gliders in critical hurricane regions of the Caribbean north and south of Puerto Rico. The gliders were deployed in July and will be recovered at the end of hurricane season.  The gliders will profile the upper ocean about 10 times daily, diving to a depth of 1,000 feet and collecting data as they ascend. When a sea glider breaks the surface, its data will be transmitted to AOML and made available in near-real time via the web. 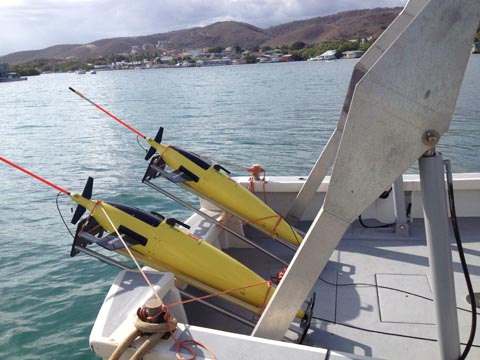 Two gliders ready for deployment from the R/V Sultana,

off the coast of Puerto Rico (credit: NOAA/AOML)

In addition to these new technologies, the Disaster Relief Appropriations Act of 2013 also provided funding to assess the impact of data from these and other instruments in hurricane forecast models. AOML will make use of its Observing System Simulation Experiment expertise to evaluate how such ocean observations can best improve hurricane forecasts of track and intensity change.

The Hurricane Research Division is one of AOML’s three scientific research divisions. Scientists with HRD, and its precursors, have been flying into hurricanes for almost 60 years and regularly collaborate with other federal, university, and international  partners to leverage that expertise to advance hurricane science and forecasting globally. Follow the latest HRD activities during this research season on Twitter or by visiting the division website.