On Posted on June 6, 2014May 20, 2021 by AOML Communications to Ocean Chemistry and Ecosystems, Oceans Influence on Climate & Weather 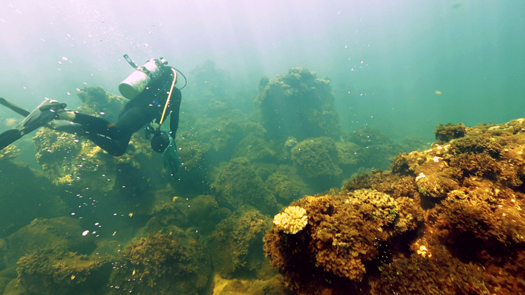 Ian Enochs, a scientist with NOAA’s Cooperative Institute for Marine and Atmospheric Studies at the University of Miami, traveled in May to the Island of Maug in the Pacific Ocean as part of a NOAA expedition aboard NOAA Ship Hi’ialakai to study coral reef ecosystems. The expedition was led by NOAA’s Pacific Island Fisheries Science Center Coral Reef Ecosystem Division and the Pacific Marine Environmental Lab’s Earth-Ocean Interaction group. Enochs focused his research on underwater vents that seep carbon dioxide into the Pacific.

Why journey to the Island of Maug to study ocean acidification?

Maug is a unique natural laboratory that allows us to study how ocean acidification affects coral reef ecosystems. We know of no other area like this in U.S. waters. Increasing carbon dioxide in seawater is a global issue because it makes it harder for animals like corals to build skeletons.

Maug is an uninhabited volcanic island in the Commonwealth of the Northern Mariana Islands about 450 miles north of Guam. The volcano breaks through the ocean surface in three areas to form islands and the relatively shallow water surrounding these islands is full of coral reefs. The underwater vents that seep carbon dioxide are found on the side of the caldera or crater formed by the volcano. Usually when I scuba dive, the moment I enter the water, air bubbles surround me and fade away quickly. On Maug, the bubbles never ceased and it felt like I was swimming in a glass of champagne.

What are your goals for studying the carbon dioxide vents?

We’re mapping carbonate chemistry over time and space to examine the extent of carbon dioxide at the site. We’re looking at how that chemistry changes over this area as you get farther from the vents and what corresponding changes there are in the coral community. We hope to learn more about which coral species are especially sensitive to elevated carbon dioxide and which may be resilient. Finally, we will look at how elevated carbon dioxide levels in seawater may influence the response of various organisms over time, including their growth rate.

What does your sampling show so far?

The carbon dioxide appears to be strongly influencing the growth of corals and algae in a small area around the vents. While there is weedy algae near the vent due to high levels of carbon dioxide, this gives way to healthier coral reefs as you get farther away from the site.

How do you measure these effects over time?

This first trip has allowed us to begin measuring the effects of carbon dioxide and to place instruments in the area that will continuously measure temperature, light, the partial pressure of carbon dioxide, seawater pH, and water currents. When we return in August, we’ll have three months of data on how this special environment has been changing day to day. Additionally, we are able to measure coral growth over time by taking core samples and by using a special dye to measure new growth. 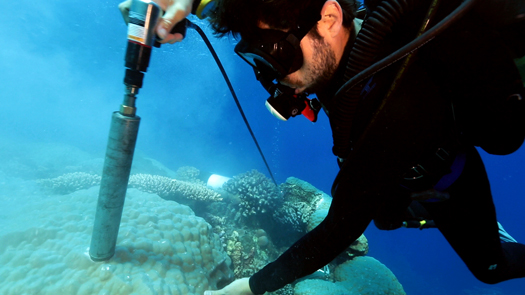 How can this research help our understanding of this and other areas of the ocean?

Research at the Maug site will help us determine the effects of elevated carbon dioxide on an entire natural ecosystem. Using this information, we’ll have a better understanding of how the rest of the ocean’s coral reefs may react to global increases in carbon dioxide and acidification. If the predictions of the Intergovernmental Panel on Climate Change remain the same, by the end of the century, the impact of ocean acidification on coral reefs around the world will be comparable to what we see on the reefs near Maug’s carbon dioxide seeps today.

Note: Ian Enochs’ research is part of a much larger research mission involving NOAA Fisheries, NOAA’s Coral Program, NOAA Research’s Pacific Marine Environmental Lab, the National Institute of Standards and Technology and other partners, including Scripps Institution of Oceanography, the University of Guam, and Open Boat Films. NOAA worked closely with CNMI coral management and monitoring experts at the Division of Coastal Resource Management and the Department of Environmental Quality. More information on the research mission is posted online.