On Posted on September 10, 2015August 20, 2021 by AOML Communications to Physical Oceanography 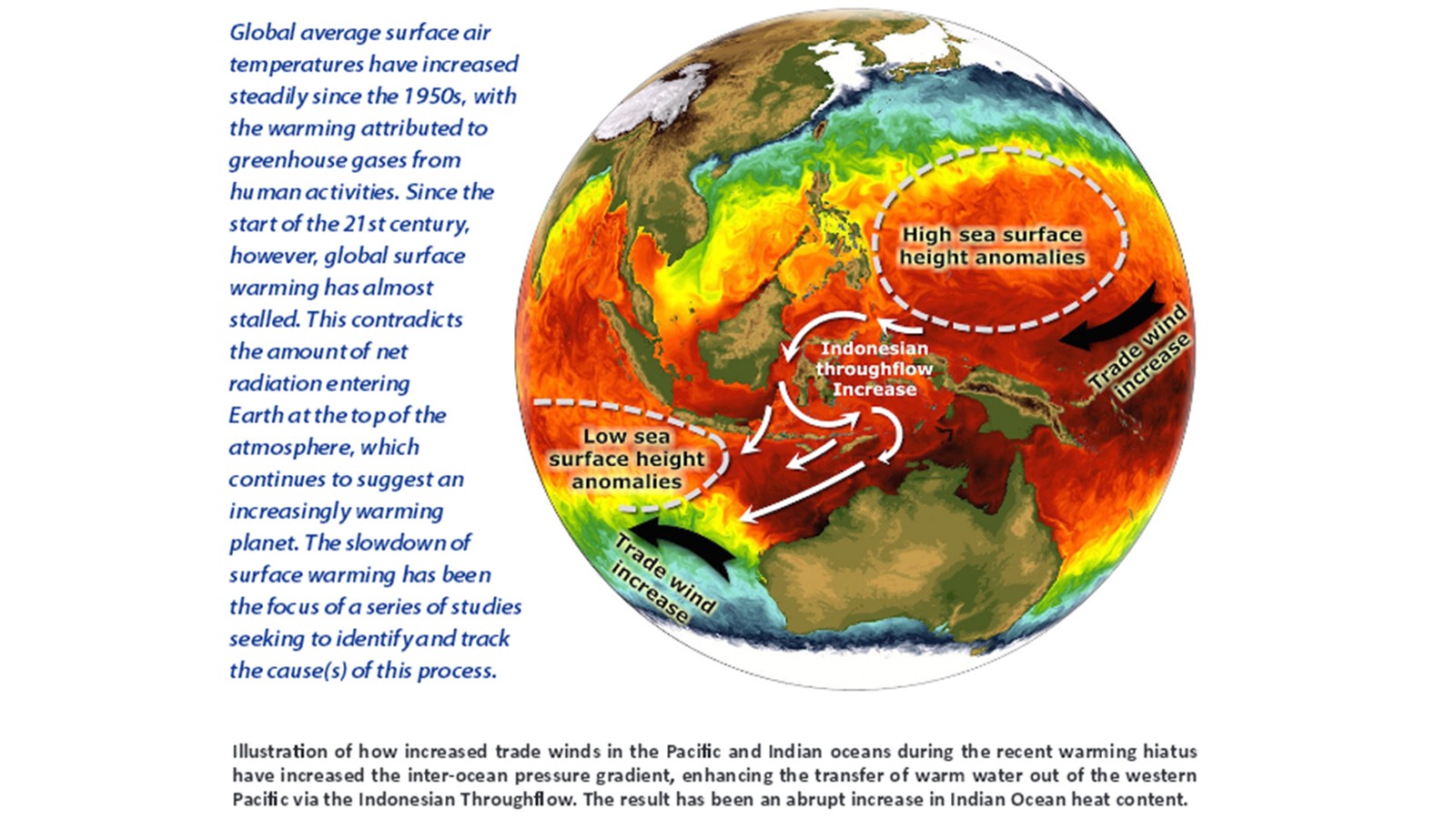 The earth is warming, but atmospheric and oceanic temperatures that rose steadily over the last half century have leveled off and slowed this past decade, causing the appearance of an imbalance in the Earth’s heat budget. Scientists looking to the deep ocean for where the additional heat energy might be stored recently traced a pathway that leads to the Indian Ocean.

In a study published May 18th in Nature Geoscience ,* researchers with AOML, the University of Miami’s Cooperative Institute for Marine and Atmospheric Studies (CIMAS), and their colleagues identified a key mechanism that explains an apparent contradiction associated with the recent pause in global warming.

Building upon previous studies that targeted the tropical Pacific Ocean’s enhanced heat uptake as the major source of the imbalance, the new study tracks the excess heat out of the Pacific Ocean and into the Indian Ocean via the Indonesian Throughflow, a current that shuttles water between the two basins. Researchers had theorized the Pacific was storing a large portion of the global heat imbalance over the last decade, thereby causing the atmosphere to warm less.

Natural climate variability processes such as the El Niño/Southern Oscillation (ENSO) phenomenon, a cycle of warm and cold sea surface temperatures in the tropical Pacific Ocean, drive wind patterns and ocean currents across the region. Since the start of the 21st century, the cold phase of ENSO, known as La Niña, has persisted, increasing the uptake of warm surface waters in the subtropics. This process and others have enhanced the uptake of heat from the atmosphere into the top 2,000-3,000 feet of the ocean.

While uptake in the Pacific as a result of La Niña-like conditions may have answered the initial question regarding the missing heat from the atmosphere, the study indicates that stored heat in the Pacific has been slowly decreasing and that the excess heat has been transported elsewhere. “When I first saw from the data that Pacific heat was going down, I was very curious and puzzled,” said the study’s lead author Dr. Sang-Ki Lee, a CIMAS scientist with AOML’s Physical Oceanography Division.

Results from the study suggest the excess heat is being stored in the Indian Ocean, which has experienced an unprec – edented rise in heat over the past decade. To determine this, the research team studied observations dating back to the 1950s and observed that heat uptake in the Indian Ocean was relatively low until about 2003. From 2003 onward, however, heat began building in the Indian Ocean, although no evidence supported the source of the heat as being from the atmosphere.

By running simulations from a global ocean-sea ice model to track the pathway of heat, the research team found that heat originally stored in the Pacific was being transported via the Indonesian Through – flow into the Indian Ocean. This heat flux transfer points to the increasingly important role played by the Indian Ocean in modulating global climate variability, as it now accounts for more than 70% of all heat absorbed by the global oceans over the past decade. Thus, the study resolves an important debate regarding the warming slow down. While scientists have theorized the Pacific is a major player in the warming hiatus, total heat in the Pacific basin has not increased, as expected. Instead, the study reveals the Pacific has been an intermediary in the heat storage process, not its final destination, which explains the lack of change in Pacific heat.

Lee has several thoughts about the future effects of this warm, deep ocean water. In its current location, Lee thinks it’s possible the warm water in the Indian Ocean could potentially affect the Indian Monsoon, an important climate pattern that impacts more than 1 billion people annually. What it means for future El Niño cycles is not immediately clear. However, Lee noted that the warm water in the western Pacific, which provides the energy needed to produce intense El Niño events, has been partially discharged into the Indian Ocean, suggesting weaker El Niño events in the near future.

Lee also indicated that the heat content is likely to continue moving with global ocean currents and may find its way into the Atlantic basin in the coming decades. “If this warm body of water in the upper Indian Ocean is transported all the way to the North Atlantic, it could affect the melting of Arctic sea ice,” stated Lee. “It could also increase hurricane activity and influence the effects of drought in the US, but future studies are required to validate these hypotheses”.