On Posted on July 7, 2017August 23, 2021 by AOML Communications to Physical Oceanography

In a recent study published in Weather and Forecasting,* AOML researchers and their colleagues used NOAA’s HWRFHYCOM operational hurricane forecast model to quantify the impact of assimilating underwater glider data and other ocean observations into the intensity forecasts of Hurricane Gonzalo (2014). Gonzalo formed in the tropical North Atlantic east of the Lesser Antilles on October 12, 2014 (panel a). On October 14, Gonzalo traveled northeast of Puerto Rico to within 85 km of an underwater glider. 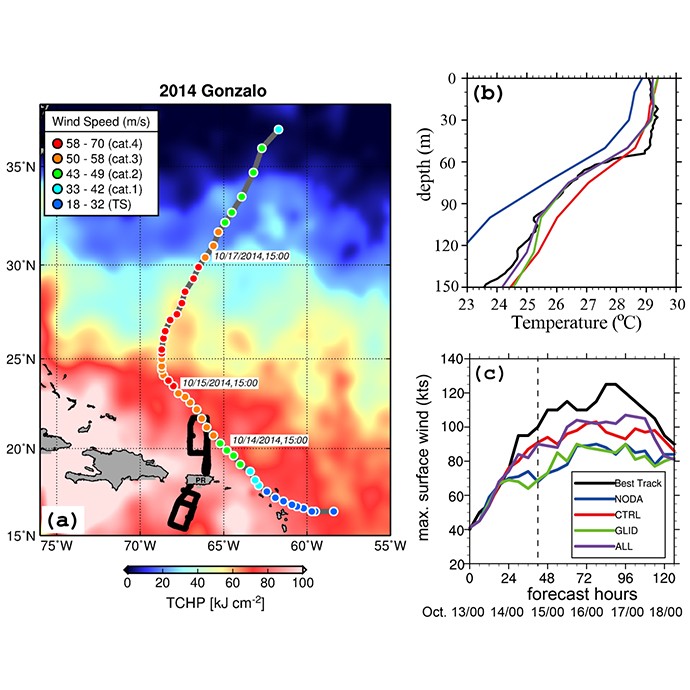 In their previous study of Hurricane Gonzalo (Domingues et al., 2015), the team reported that ocean conditions were characterized by the presence of a layer of low salinity close to the surface, which caused strong vertical density gradients. This near-surface layer, often called a barrier layer by oceanographers, may have likely contributed to the further intensification of Hurricane Gonzalo. Gonzalo reached Category-4 hurricane status on October 15, 2014, making it the most intense Atlantic hurricane during 2011-2014.

For the current study, it was found that the barrier layer observed prior to the passage of Hurricane Gonzalo and its associated sharp density gradients were only successfully represented in the ocean initial conditions with the inclusion of underwater glider data. An analysis of glider observations gathered during Gonzalo’s passage revealed that the ocean was better represented in the operational model with the assimilation of underwater glider data. Results show that the pre-storm thermal (panel b ) and saline structures of the upper ocean, used as initial conditions for the hurricane forecasts, were substantially improved when compared to HYCOM numerical experiments that did not include underwater glider data and other ocean observations.

The Hurricane Underwater Glider network will collect ocean observations during the upcoming 2017 Atlantic hurricane season as part of NOAA’s Hurricane Field Program. The effort has already gathered and distributed large, unique datasets of upper-ocean observations in real-time from the Caribbean and tropical North Atlantic. To date, the gliders have produced more than 14,000 profiles from these regions of parameters that include temperature, salinity, dissolved oxygen, chlorophyll- a , and backscatter.

More information about the NOAA/AOML-CARICOOS glider project can be found at /phod/goos/gliders/index.php.