The Meridional Overturning Circulation (MOC) plays a critical role in global and regional heat and freshwater budgets. Recent studies have suggested the possibility of a southern origin of the anomalous MOC and meridional heat transport (MHT) in the Atlantic, through changes in the transport of warm/salty waters from the Indian Ocean into the South Atlantic basin. This possibility clearly manifests the importance of understanding the South Atlantic MOC (SAMOC). Observations in the South Atlantic have been historically sparse both in space and time compared to the North Atlantic. To enhance our understanding of the MOC and MHT variability in the South Atlantic, a new methodology is recently published to estimate the MOC/MHT by combining sea surface height measurements from satellite altimetry and in situ measurements (Dong et al., 2015).

The goal of this work was to enhance our understanding of the variability of the MOC and MHT in the South Atlantic. In order to achieve this goal, we developed a new methodology that allows to obtain the MOC and MHT time series since 1993 through a combination of the satellite and in situ measurements.

Results obtained from this work show the importance of maintaining sustained observations, such as those from the XBT transect AX18, which are critical to validate altimetry estimates. In addition, measurements from the global observational system are part of the input data of the methodology.

This study represents the first effort to estimate a time series of the MOC in the South Atlantic between 20°S and 34.5°S. The 20-year time series of the MOC and MHT estimates showed that the dominance of the geostrophic and Ekman components on the interannual variations in the MOC and MHT varies with time and latitude, with the geostrophic component being dominant during 1993-2006 and the Ekman component dominant between 2006 and 2011 at 34.5°S (see figure below). 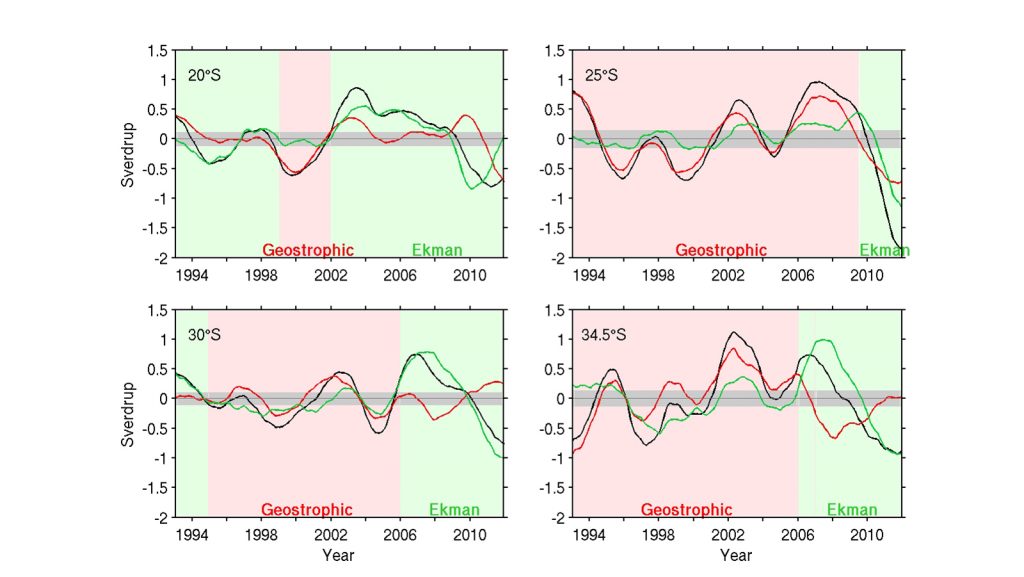 The methodology will allow to estimate the MOC and MHT in real time (soon to be included in the web page), which can be used to validate numerical models.

For detail of the methodology and results, please refer to: