On Posted on September 20, 2015May 20, 2021 by AOML Communications to Ocean Chemistry and Ecosystems, Photo Gallery

AOML coral scientists participated in a NOAA National Marine Fisheries Service-led project to document coral spawning in the Florida Keys National Marine Sanctuary during August & September 2015. The project aims to measure spawning success for two imperiled Caribbean species, elkhorn coral (Acropora palmata) and mountainous star coral (Orbicella faveolata) in the Florida Keys. The team collected gametes from both species to be used in experiments that aim to improve the understanding of factors that may enhance the likelihood of coral larvae to survive and settle on the ocean floor. Experiments will also assess impacts of current and future global environmental changes, such as ocean acidification, on these vulnerable early life stages of corals. Click on the image below to view a video of a spawning mountainous star colony. 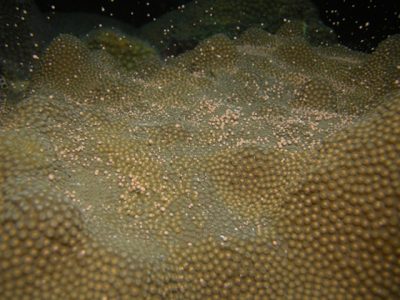