On Posted on February 1, 2015February 10, 2022 by AOML Communications to Events, Scientist Interviews 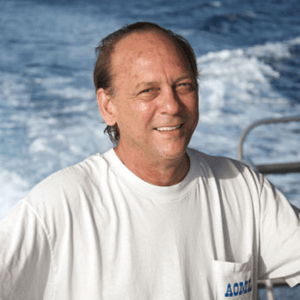 AOML is proud to announce the selection of Dr. James “Jim” Hendee as the director of its Ocean Chemistry and Ecosystems Division. Internationally recognized for his expertise in coral observing systems and data management, Jim’s almost 25-year tenure with AOML began in 1990 as a data manager for several ocean chemistry programs. Jim is well known for his ability to leverage resources to innovatively develop and inspire productive research teams. Jim steps into the role of director after serving in an acting capacity since June 2013.

Jim’s early career at AOML blossomed as he oversaw data management of the newly established SEAKEYS program, a network of lighthouses and other platforms that collect hourly in situ sea temperature and meteorological data at coral reef sites along the Florida Keys.  Jim initially gathered SEAKEYS data and distributed it daily via fax (“Coral Fax”) to environmental managers in the Florida Keys, as well as to dive boat and fishing charters. Seeing an opportunity to embrace emerging technology and the burgeoning Internet, Jim successfully launched the  “Coral Health and Monitoring Program” (CHAMP) to start the very first coral reef related Web page, and one of the first 3,000 Web sites in the world. The server was also used to host a list-server called Coral-List with about 100 names taken from the attendee list for the 8th International Coral Reef Symposium in Panama.  That list still operates today with over 8,500 subscribers and has become the de facto means of broad communication among coral reef researchers the world over.

In 1998 Jim was chosen as one of the members of the newly established U.S. Coral Reef Task Force Monitoring Working Group.  Jim and his growing team of NOAA oceanographers eventually devised a new design for in situ coral reef monitoring and began installing the design at coral reef sites in the Caribbean, with funding help from NOAA’s newly formed Coral Reef Conservation Program.

Through the years the CHAMP program has received over $8 million for coral reef research and to develop the expert system that is the heart of the CREWS ecological forecasting system. Jim’s efforts have supported acquisition of an appreciable amount of computing hardware and software, oceanographic and meteorological instrumentation, and supported five major international workshops.  Jim also leverages the continuing CHAMP funds to establish and support new research directions (e.g., ocean acidification, ecological forecasting, physical oceanography of coral reefs) and personnel support for research scientists and system administrators, five National Research Council post-docs, and numerous Hollings Scholars and student interns.

From 1993 to 2000, Jim worked nights to earn a Ph.D. in Information Systems from Nova Southeastern University. His previous degrees include a B.S. and M.S. in marine biology.  In 2000, Jim received the NOAA Research Employee of the Year award, and in 2005 the NOAA Bronze medal for establishing the CREWS Network.